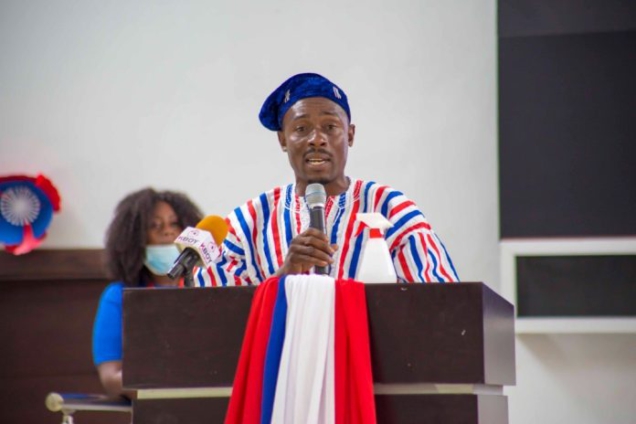 The Greater-Accra Regional Secretary of the New Patriotic Party (NPP), Daniel Parker Odarlai France, has rubbished claims that names of some 430 delegates have been unjustifiably deleted from the register being used for the Okaikwei South Constituency elections.

He argued that persons whose names have been removed failed to contest the polling station elections.

This comes after some NPP delegates in the constituency vowed to prevent the conduct of the elections if names of qualified delegates are not included in the album.

They alleged that some members of the National Democratic Congress (NDC), as well as NPP delegates from other constituencies, have been added to the register to increase the fortunes of some aspirants.

The victims swore to fight for their rights until the right thing is done. They also asked that the old album be used for the exercise.

But in an interview with JoyNews, Daniel France refuted the claims.

“There is nothing like that. It was an election. When you lose, you are not part. Who gave them that assurance [that their names will be maintained in the register]? The Party told everybody that when you want to contest, go and pick a form and contest. So, [they] should have availed themselves for the contest. If you didn’t avail yourself for the contest, then it means you can never be an automatic delegate.

According to him, the processes leading to the conduct of the congress were smooth and was approved by the region.

“You know, in this our game, speculations are there; a lot of rumours…the right thing has been done. All those in this queue are NPP people. If you are not part of the process, next time you will join.

“Go and work hard, come and join. I have gone for elections that I’ve lost before and I’ve won some,” he added.

Earlier the concerned delegates alleged that they have been deceived, “they earlier told us they would maintain all delegates and where necessary, add new ones – we agreed. Our request for the album was declined on several occasions. It was only yesterday that our leaders got it from the region, only for us to realise that 413 delegates’ names have been taken out,” some of the delegates claimed.

However, Mr. France debunked their claims and condemned them for confronting the Police. He called for the enforcement of the law should any member of the party misbehave.

Already, about four delegates have been arrested after the delegates massed up on the road leading to the venue of the congress.

They blocked the vehicle of the Electoral Commission officials, who were accompanied by Police personnel.

According to JoyNews’ Kwesi Parker-Wilson, the delegates were resisting attempts by the Police to shove them away and pave way for the vehicle.

This led to fracas between some of the Police officials and the delegates.

The delegates started pelting stones at the Police, causing some of the personnel to retreat.

The vehicle conveying the EC officials finally gained access to the Prince of Peace School located at Bubuashie.