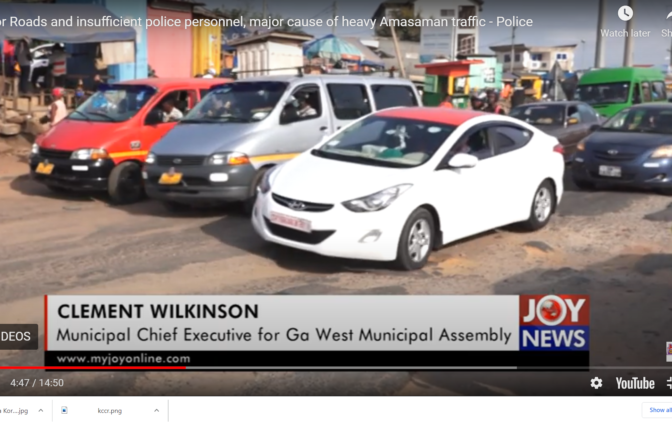 The Police Motor Transport and Traffic Directorate (MTTD) has disclosed that road engineering contributes to about 60 per cent of road traffic on the Nsawam – Amasaman road linking to Pokuase.

According to MTTD Commander in Amasaman, DSP Vincent Appiah disclosed that driver indiscipline, haphazard pedestrian crossing, and absence of the police are also major contributors to the usually congested roads, particularly during rush hours.

“My observation is that the more traffic we are experiencing on the Nsawam-Amasaman stretch is as a result of three factors that I have identified ie, road engineering, misbehavioural of commercial vehicle drivers, that’s Trotro drivers and then pedestrian drivers and police absence.

“But road engineering takes about 60 per cent of the cause of the traffic on the road, this is because there’s a porthole just at Amasaman bus stop a very big one. So when the vehicles get there they are not able to move especially the long trucks,” he stated.

Meanwhile, the Municipal Chief Executive for Ga West, Clement Wilkinson also intimated that the traffic on the Nsawam – Amasaman road will be reduced in due time.

“Adding that “the road has been awarded to a contractor and the contractor is already on the road. But there was a little challenge that is why the contractor put a stop to it. I met the Director of high way and he promised that in the next month the roads will be fixed,” he explained.