Power Minister confirms holdup of power barge, but says it will arrive on schedule 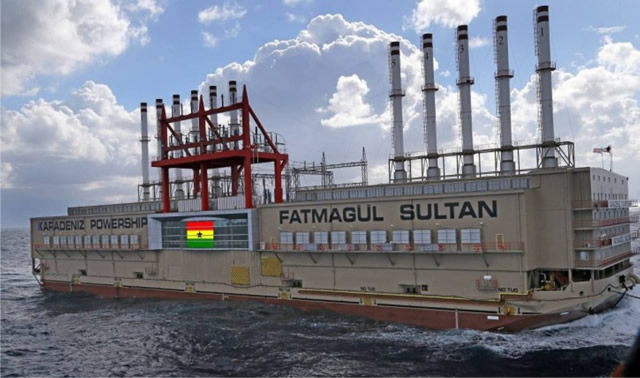 Power Minister, Kwabena Donkor, has confirmed that the Karpower barge is yet to set sail from Turkey to Ghana, contrary to reports that it started that journey last week Tuesday.

Officials at the Ministry had indicated during the commissioning of the barge in Turkey last week it would arrive in Ghana on November 10, fifteen days after it set sail.

The Minister explained that although the barge left the dock after a brief ceremony inTurkey to commission it, it did not set sail to Ghana immediately as misconstrued.

During an inspection of upcoming power projects in Tema on Wednesday, the Power Minister said the holdup of the barge in Turkey was due to customs clearance procedures.

“We said that [the power barge] was going to go into quarantine for customs for checks to be done within the three-week period. So it is not when it sets sail [to Ghana]. At least it set sail from the dock to customs for quarantine,” he said.

Dr Donkor however insists the barge would arrive on scheduled.

The power barge is one of the ways government is counting on to mitigate the country’s energy crisis. A nationwide load-shedding exercise has been going on since last year.

The Minister said government is on course to end load-shedding by the end of this year, outlining ongoing power projects to make it a reality.

He said the Tema-based Sunon Asogli power plant is among ongoing projects expected to add to the country's installed megawatts. The Sunon Asogli plant would add about 100 megawatts to the national grid.

Government has set a generation target of 5,000MW capacity by 2016, in a bid to make Ghana a hub for electricity generation as well as a net exporter of electricity in the West African Sub Region.