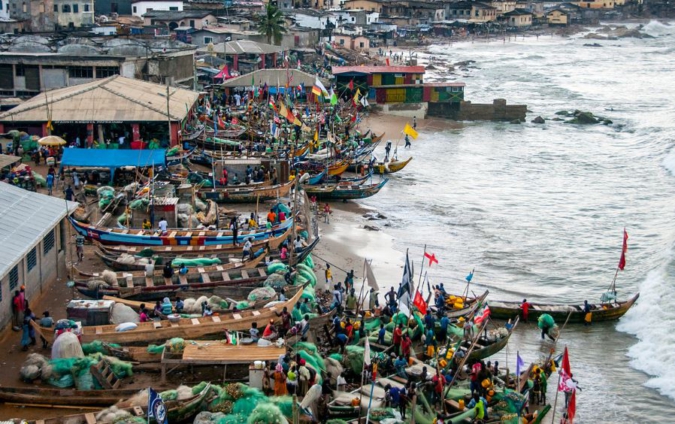 Some members of the fishing community have resolved to demand timelines from political parties who will make promises during this campaign season.

A leading member of the Ghana Canoe Fishermen Council, Nana Kweigya made this declaration on Adom FM’s Burning Issues programme.

Nana Kyeigya commended the government for some improvement on premix fuel management and construction of some landing sites but was dissatisfied with the implementation of the fisheries laws so far, citing ‘Saiko’ – illegal transhipment as the worst within this regime.

“Although more needs to be done to ensure proper distribution of prefix fuel, we have witnessed some improvement in its management. I can see work on landing site construction has begun in Moree but I can’t testify for Manford or Axim since I haven’t been there yet,” he said.

He describes ‘Saiko’ as the most destructive form of Illegal Unregulated and Unreported (IUU) fishing as it doesn’t afford the fish ample time to spawn to replenish the depleting stock.

“I feel some of the fishermen are working with the ‘Saiko’ people and adopting illegal means of fishing out of frustration because they hardly get anything if they engage in proper fishing,” Nana Kweigya explained.

He called on political parties to desist from the usual lip services paid to the sector.

“We are looking for a party that will come out with proper management plan and will allow fishers to partake in the process. Again, we won’t look for just a plan but how the plan will be implemented. We also want to see a party that can indicate how it will enforce the fisheries regulations with proper timelines. We need a party who can introduce an insurance scheme to capture fishers,” Nana Kweigya demanded.

Programme Manager for Friends of the Nation, Kwadwo Kyei Yamoah maintained it is possible for any government to introduce a pension scheme for fishers.

“When there is a will there is a way. Government can work with an insurance company to enroll fishers on an affordable scheme. We have been bumping a lot of money into premix fuel subsidy, yet fishers hardly get anything after sailing for miles. We spent GHC300 million on premix subsidy just last year; why can’t government divert part of this money into insurance scheme for fishers, “he questioned.

The Vice President of the National Fish Processors and Traders Association (NAFPTA), Emelia Abaka Edu expressed her dissatisfaction over the years with political parties manifestoes.

“I can’t remember any manifesto in the past years which has dealt with women related issues. We are looking for a party that will factor the women’ needs in the fisheries sector. We have a lot of issues because women are doing a lot within the fisheries value chain,” she said.

Madam Emelia also called for a manifesto that will decisively empower the women with the needed technology and skill to help them thrive.

“We need manifestoes that will build women’s capacity from proper fish handling and hygienic way of smoking fish. Most women can’t afford the standard oven needed for fish smoking because of cost. They have told us the ovens most women use have high PH that can cause cancer. How can this be factored and included as part of reforms earmarked within this sector in a party’s manifesto? The successful introduction of these advanced ovens will take care of consumers as well; because if we don’t use the right methods for fishing, consumers will be affected health wise,” she explained.

She entreated politicians to come out clearly on their commitment to this sector devoid of party colours but inclusive and participatory.

“Over the years, what they have been doing is engage in selective trainings. They pick only few people on party colours for workshops. We are requesting for trainings that will be done from landing site to landing site to include everyone. We won’t allow them to just pay lip services but to indicate how and when the things they promise will be done so we can monitor and praise when it is done well, she cautioned.

The fisheries discussion on Burning Issues is under the Far Ban Bo Project with support from the European Union in collaboration with Care International Friends of the Nation and Oxfam.