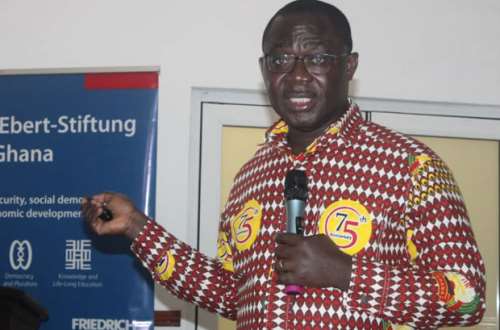 The Director of Labour Research and Policy for the Trades Union Congress (TUC) has called for a review policy that allows for a comprehensive pay structure for public sector workers.

Dr Kwabena Otoo says the current system has created salary and allowance gaps that transcend into inequalities in amounts paid to pensioners.

According to him, a new framework for public service workers must be adopted for a more equitable, transparent and justifiable system that links pay to productivity.

In an interview on Newsfile on Saturday, the economist advocated a total overhaul of the current pay system while efforts are made to put in place a unified pension module.

“If you go back a little bit into history, Single Spine Structure was installed to avoid negotiating in silos so that there is full disclosure and full transparency.

“Now, we are back to a situation where we now have those multiplicities of allowances, and for many public sector workers, that allowance we are taking is not counted when you are being paid the pension,” he said.

Dr Otoo added, “We should always bring our minds back to the fact that the low pay we are receiving in the public sector will eventually reflect the low pensions we’ll receive.

“A minimum pension in Ghana today is ¢300, and a significant number of Ghanaian pensioners actually receive that ¢300. But, to let you know, the highest pension in the country is also ¢142,500; so, the inequities in pay then reflect in inequities in pension,” he noted.

On Wednesday, April 20, the Trades Union Congress (TUC) pushed government to adjust workers’ basic salary to meet the rising levels of inflation, something they say is making it difficult for them to meet their basic needs.

The TUC noted that it was no secret that remuneration for many workers has been bad for many years, saying Covid-19 and the Russia-Ukraine crisis could not take the blame.

“Inflation is another issue – the prices of goods and services are going up, so if salaries are not adjusted to reflect these phenomena, workers will continue to struggle. The job crisis did not start with Ukraine.

“It predates the Ukrainian war; it came before the Covid-19 and, therefore, we think it is not right to blame Ukrainian war and Covid-19 for every job crisis we have in this country,” he stated.

Meanwhile, a finance lecturer at the University of Ghana, Prof Godfred Bokpin, has called on the government to engage labour unions over their salary and allowance concerns.

“You also have to look at what the economy can afford; whether the government has the fiscal space to be able to load on all of that…that will be very helpful rather than just saying that let’s strictly use the inflation, let’s say 19 per cent and all of that,” he said.