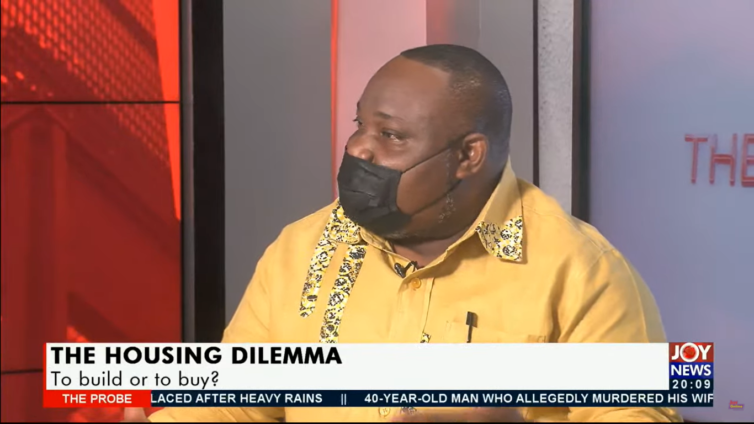 The Executive Secretary of the Ghana Real Estate Developers Association (GREDA) has highlighted steps that need to be taken to bridge the huge housing deficit in the country.

Samuel Amegayibor on JoyNews’ The Probe Sunday, suggested that construction rights should be given to only real estate developers to ensure that the accommodation shortage is effectively dealt with.

According to him, although Ghana should be building at least 100,000 units annually to deal with the situation, only 40,000 houses are built, thus, will worsen the situation if stringent measures are not taken.

“And so we need to take certain steps and measures to change the way we are doing things. We must make sure that we are increasing the stock, it is either we are taking the mantle from the individuals and making it commercial for real estate developers to build for us so that we can relax and just look for money to pay.

“But if the ratio is going to remain the same and everybody would have to struggle and go and find land, find funding, and recruit workers to build I think it doesn’t order well for the nation,” he told host Benjamin Akakpo.

For Mr Amegayibor, the housing deficit after the ongoing census could exceed the projected figure since deliberate steps have not been taken to resolve the shortage.

In his view, “We [Ghana] haven’t done what we should have done in the past and 10 years down the line, it has compounded.”

On his part, the Head of Advantage Banking of Ecobank Ghana, Winston Wobil blamed lack of planning as a major reason that is preventing a lot of people from owning homes.

“Planning and knowing how to start the project in the first place is what is hampering a lot of people from building. And this brings back the question, ‘to build or to buy?’

“Because making that choice and knowing which choice to make at what time goes a long way to affect how your project will go. And whether you are going to own a house now or own a home when you are about going on retirement,” he said.