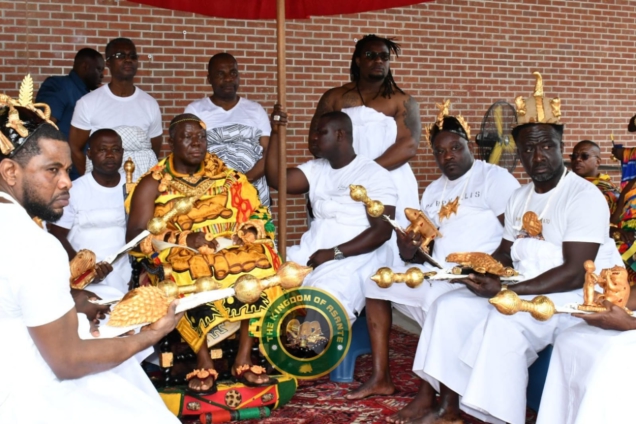 The Asantehene sitting in state in Memphis, Tennessee in the US. Photo credit: The

I have been trying to find a true description for his spectacular show of regency and flow of astuteness and statesmanship at home and abroad but words continue to elude me. My dictionary and thesaurus are not throwing up the kind of description I am looking for.

In order not to breach any protocol, therefore, let me simply say that Otumfuo Osei-Tutu II is an inspirational statesman. He charms, you follow and you never regret it.

As a proud Ghanaian, born and bred Ashanti royal myself, I have learnt and continue to learn a lot from Otumfuo whenever the opportunity avails itself.

And so last week in faraway Memphis, Tennessee in the United States of America, His Royal Majesty unveiled another show of an exemplary leader with attraction and following. He presented Ghana in totality, leaving no doubt of his allegiance to this beautiful and colourful nation and of course to the Ashanti kingdom he supervises.

The videos shared from his visit are simply awesome. They were too invitational to miss the message the entire visit programme communicated. Scenes to behold portrayed Ghana in truly positive terms – a warm and colourful country, simply the best.

Otumfuo was the guest of the Mayor of Memphis last week as the city celebrated its 2022 traditional Memphis in May when they honour and celebrate a country. The annual celebration on the calendar of the US city is also meant to unify, honour the ancestors and pray for the prosperity of the land and the people.

Per the videos that circulated, Otumfuo made Ghana proud beyond measure. I felt elated as a Ghanaian and no doubt a talk of the town for the people of Memphis.

The welcome reception from the night of his arrival into the city in a private jet, through to the colourful durbar and sitting in state, everything was like as if he was celebrating a big Akwasidae festival at the Manhyia Palace.

It was a day of display of rich colourful assorted kente wears by all who attended, men and women.  There was a lineup of representations from Ashanti groups in Dallas, Washington, Denver, New York, Ohio, Virginia and some other parts of the US.

Some prominent chiefs from the Ashanti Kingdom here in Ghana were in Otumfuo’s delegation also spotted in full rich regalia. It was like America’s day of who is who in Ashanti chieftaincy, a roll call, perhaps.

The huge “atumpan” and “fontomfrom” drums, the colourful umbrellas of chiefs, the gold adornments, and the Adowa dances transformed the durbar held to climax the celebration.

As Otumfuo sat in state to receive guests, there was a long line up of individuals and groups to pay homage. Ghana’s Ambassador to the United States (US), Alima Mahama led the delegation from the Ghana Embassy in Washington. Taking turns to greet His Royal Majesty was also the former US Ambassador to Ghana, Stephanie Sullivan, the Mayor of Memphis and a few more dignitaries from all over the US.

When he had the opportunity to speak at the University of Memphis, Otumfuo left no doubt in the minds of his audience as to his pride in his country. He spoke about his Educational Foundation for needy students some of whom have been successfully supported through tertiary education and are now serving in leadership positions in the country.

He highlighted the value of education to the country and made mentioned the current government’s brilliant idea of free Senior High School education for every Ghanaian child. He said, unfortunately, the huge cost involved was becoming a challenge for the country’s finances.

Otumfuo has been consistent with his pride for Ghana whenever he speaks, either to investors who call on him at his Manhyia palace or to gatherings abroad when duty calls outside the country. His call for investments in Ghana’s peaceful environment has always been on point.

Whenever he presents his Ashanti kingdom to outsiders, the bigger Ghana picture is always on his mind.

I have followed some of his overseas engagements in the past, where he was given the platform and invariably the Ghana agenda is presented as part of his package. One could not have asked for more from a true statesman.

The Memphis story ignites a lot of ideas we could steal with pride as a nation. In our bid to attract investors, the return of our own Ghanaians settled overseas, the African Americans who claim their roots from Ghana in particular, and all others who wish to have a second home in the sun could be potential targets.

As they come, they come with their foreign currency to spend, and our hotels get continuous business, creating employment for locals in the total hospitality chain.

So, to our Ghana Tourism Authority, how about Ghana in June, Accra in July, Kumasi in August, Cape Coast and Elmina in September? We can add on till infinity.

Four or more months of colourful focused celebrations to showcase our country during the cooler months for diasporans to come “home”, taste and see? Definitely, a creative way to promote a country.

You can reach the writer via email at vickywirekoandoh@yahoo.com