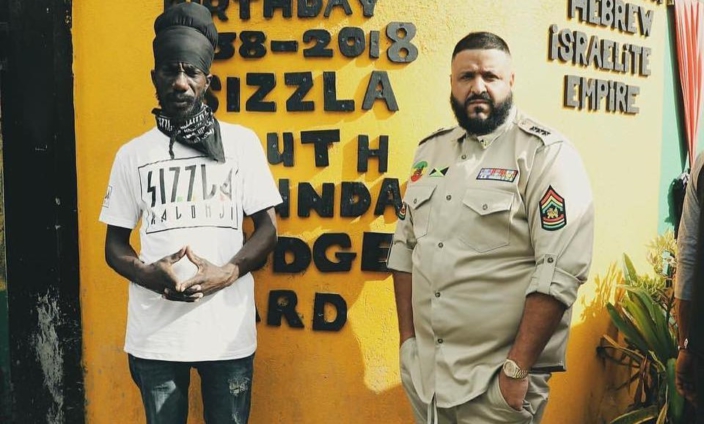 Reggae/Dancehall artist Sizzla has a bone to pick with DJ Khaled.

On Thursday, December 8, the dancehall legend and frequent DJ Khaled collaborator shared a video on Instagram of himself and some friends dismantling and setting ablaze multiple plaques Sizzla received for his work on the Khaled albums Father of Asahd and Grateful.

In the video, Sizzla can be heard saying he was insulted by Khaled. However, he doesn’t provide further details.

The men then break apart the framed commemorative plaques, making sure to cut out and set aside the photos of Khaled’s son Asahd out of respect.

“Cut out the baby picture. The baby is innocent,” Sizzla instructed.

After breaking down the presents, the men put them in a pile, add gasoline and let it burn. In a follow-up video, Sizzla films the pile ablaze.

“Insult me,” Sizzla reiterated. “You’re not the best, you’re the worst…Burn the devil. Burn corruption.”

Sizzla appeared on the intro track to DJ Khaled’s 2017 album Grateful. In 2019, he was featured on the Father of Asahd intro track “Holy Mountain” along with Buju Banton, Mavado and 070 Shake.

DJ Khaled also tapped Sizzla for his latest album, God Did, on “These Streets Know My Name” with Skillibeng, Buju Banton, Capleton and Bounty Killer.

DJ Khaled faced backlash late last month, after a video from 2015 resurfaced that showed him talking down on producers who use FL Studio and Logic.

DISCLAIMER: The Views, Comments, Opinions, Contributions and Statements made by Readers and Contributors on this platform do not necessarily represent the views or policy of Multimedia Group Limited.
Tags:
DJ Khaled
Sizzla