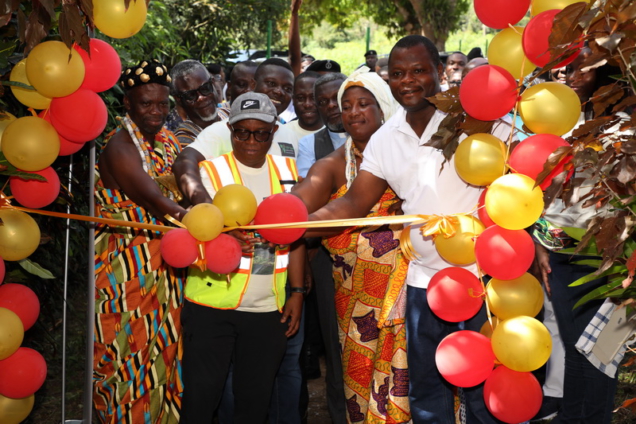 A colorful durbar of chiefs and people from the adjoining communities was held at the Amedzofe community park in the Ho West District of the Volta Region recently.

Interestingly, the canopy walkway also serves as an ambitious eco-tourism which is the first of its kind in the country .

Dr. Caleb Ofori Boateng is Ghana’s first herpetologist, whose work has well positioned Ghana on the international scene, especially in the area of conservation and protection of frogs.

Concerning how he became an advocate for frogs, Dr Caleb Boateng said he was drawn to amphibians because of their global mass population declines and the extinction crisis.

He was deeply concerned that amphibians were being wiped out from the face of the planet and nothing was being done to stop this extinction, adding that it is interesting to be with frogs in the forest to understand how truly amazing and unique frogs are.

“I found the last remaining population of a critically endangered frog (Conraua derooi) in some community forests in eastern Ghana (Amedzofe, Ho West District, Ghana) that did not occur in government-protected land. The frogs occurred in forested streams. The forest along the streams is very important for the frog’s survival.

Unfortunately, the local people hunted and ate the frog-it was a local delicacy. They also cut down the forest along the stream for wood and to make new farms, hence the establishment of a community-based ecotourism program that provides economic opportunities for local communities whilst sustaining wildlife conservation efforts,” he said.

The ecotourism program is built around an endemic frog species (Togo slippery frog), its waterfall habitat, mountainous landscape and a canopy walkway.

Already, he has helped in educating hundreds of rural residents on how to protect endangered frogs and establishment of the first protected area for endangered amphibians,

In fact his research led the establishment of a large protected area for endangered frogs in Ghana (Onepone Endangered Species Refuge).  Interestingly, this is is the first time a protected area has been established in the country for frogs.

The project has turned out to be an achievement Dr Caleb is excited about since it took him a lot of effort to complete it.

This brought him closer to a task that is how to shape the minds of community members to appreciate the value of amphibian conservation which stood in sharp contrast to their cultural beliefs.

This however required bringing a lot of people including politicians from different political parties who under normal circumstances will not work together for the project to take off, but was able to bring them to the drawing table.

Currently, Dr. Caleb Ofori Boateng has trained and mentored over 50 young conservationists in Ghana and across Africa.

“I am also excited that my research has contributed to the discovery and description of several new species to science. My excitement stems from the fact that, these new discoveries are helping to canvass support and influential political decisions for the conservation of not only frogs, but also other imperiled species,” he explained.

His greatest scientific discovery has been the contribution to the discovery and description of five new amphibian species to science and a few more that are awaiting formal description.

He said making knowledge of existence of a new species paves the way for national conservation strategies to be developed and implemented for these species.

He is of the view that amphibians are very good indicators of ecosystem health, activities that benefit them also benefit several other species.
One of the species he described in 2018 (Phrynobatrachus afiabirago), became a trigger species for making a unique forest site in Ghana (the Atewa forest) and Allianz for Zero Extinction site (AZE)-an international designation given to sites that harbors a significant proportion of the last remaining population of an Endangered or Critically endangered species.

His extensive research works of conserving Ghana’s amphibians and vigorous campaign to end extinction of amphibians led to his being shortlisted for the Tusk Award for Conservation in Africa.

Dr. Caleb Ofori Boateng’s plan for the future is to come up with priority amphibian conservation sites in Ghana dubbed ‘Important Amphibian Areas (IAAs) and these sites will be the most diverse amphibian sites which is expected to contribute significantly to the global persistence of amphibians.

He promises to use his influence to campaign for the legal recognition and conservation of the ‘Important Amphibian Areas and work with local communities to promote tourism and other activities that ensure that communities benefit from the establishment of these IAAs.

DISCLAIMER: The Views, Comments, Opinions, Contributions and Statements made by Readers and Contributors on this platform do not necessarily represent the views or policy of Multimedia Group Limited.
Tags:
canopywalk
conservation
Voltaregion