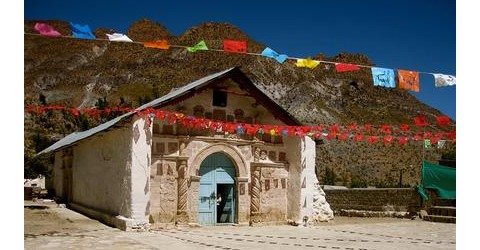 Chile’s capital city is virtually earthquake-proof. Even the massive 8.8-magnitude shock that struck the country’s centre in February 2010 caused little structural damage in Santiago, thanks to state-of-the-art architecture and strictly enforced construction codes.

But more than 2,000km north of the big city, near the Bolivian border, the traditional villages located high up in the Andean altiplano have not fared as well. Over hundreds of years, earthquakes have rocked the agricultural Arica and Parinacota region, slowly destroying nearly 100 old adobe missions built by Spanish missionaries in the 16th and 17th Centuries.

There is a particular poignancy to these crumbled church ruins. Thanks to its strategic location between the Andes, the Atacama Desert and the Pacific Ocean, the Arica and Parinacota region was once the home of three major empires — Tiwanacu, Inca and Spanish. Today however, the native Aymara culture, once populous and rich with ancestral tradition, is dying out after 10,000 years of recorded history, with families moving down from the antiplano in search of jobs and education in bigger towns and cities. In the last two decades, the rural population has decreased by a third to just 2,675 people, with villages that once had populations of around 300 now housing 40 or fewer inhabitants.

The Spanish-built missions are symbolic of the region’s varied and disappearing history. While the Aymara adopted some of the Catholic ideologies and traditions forced upon them by European settlers, they also continued to practice their own religion, an older native American belief system. The churches were places of worship for this unique blend of faiths, and those that still stand remain the sacred hearts of the communities today.

Over the years, villagers have tried to preserve these churches, usually with no financial support. Many tried rebuilding themselves, often using cheap materials or making unsuccessful repairs. In one village, Belén, the locals gave up on the 18th-century temple of Virgen Candelaria after it was badly damaged in the earthquakes of 1868 and 1877, turning the shell into a school and storage space.

But hope has not been lost. In 2005, the non-profit Chilean organisation Fundación Altiplano – which focuses on promoting sustainable development in Chile’s rural communities — announced an ambitious initiative to restore 31 of the 90 churches in the region. The project, La Ruta de las Misiones (The Way of the Missions), set to be completed in mid-2013, has already reconditioned several of the rustic, single-level adobe missions, restoring their original carved wooden and copper fixtures. According to project director Cristian Heinsen, rebuilding the churches is a fundamental first step in revitalising this fading culture.

“The key of successful preservation here is to understand that the region has undergone huge cultural changes, and the church is where people go to preserve their Aymara soul and mixed heritage,” he said.

Today, after a few large-scale renovations employing local workers, the mission in Belén is back in use and open to visitors, its facade once again gleaming white and its finely carved stone doorway repaired. In addition to restoring the church, the foundation added a series of landscaped terraces to the sun baked plaza and renovated the nearby parish house to make the interior bright and comfortable, using furnishings made from local materials. The foundation also implemented the successful rural film festival Arica Nativa, now in its seventh year, with screenings and musical performances held in the restored church and plaza each October.

About 20km away in the nearby village of Socoroma, construction workers have been rebuilding the ceiling of the 19th-century church of San Francisco de Asís, while a team of conservators used tiny picks to scrape old paint off Virgin Mary statues inside the church. “Every time we start a restoration we ask permission from Pachamama [the Mother Earth goddess],” Heinsen said. “It’s a wonderful experience to restore an Andean church, like travelling to an older time.”

The region is already attracting curious travellers wielding the foundation’s useful Ruta de las Misiones map (available to download from the foundation’s website), and the plan is to attract more. Although the churches will soon be finished, Fundación Altiplano is helping the Aymara people learn traditional skills — from tending livestock to producing the region’s famous queso de cabra (goat cheese) — and teaching villagers how to renovate their homes, using the beautifully restored parish house in Belén as an example, in the hope that they will be able to host travellers in the future.

“We are not changing the area,” Heinsen explained. “We are just trying to wake it up. We have to convince people that they have a treasure here.”

While tourism is important to the future of the altiplano, Heinsen said the most satisfying effect of the project has been the surge of pride among the Aymara people when they see their beautifully repaired churches and return home to participate in the region’s colourful religious festivals.

Some of the best festivals for travellers to experience are those honouring the patron saints specific to the different villages, especially the Virgen de los Remedios in Timalchaca Sanctuary (21 November), San Pedro de Guañacagua or Esquiña (29 June), Santiago de Belén (25 July) and San Francisco de Socoroma (4 October). “These festivals connect the people to their ancestral traditions,” Heinsen said. “And for the Aymara, one’s old church is like one’s old heart.”

Practicalities
The best way to explore the villages and churches is to rent a car in the city of Arica, about 125km away, although there is a twice-daily bus service between Arica and the village of Putre, which is the hub of tourist services in the altiplano. There is excellent hiking and wildlife viewing in the region, with 130 species of birds including flamingos and guanaco in the nearby Parque Nacional Lauca, as well as cave paintings, volcanoes and salt lakes. Many travel agencies and hotels in Putre offer tailor-made tours and arrange 4×4 transport to the villages; a top choice is the eco-friendly boutique hotel and tour operator Terrace Lodge.