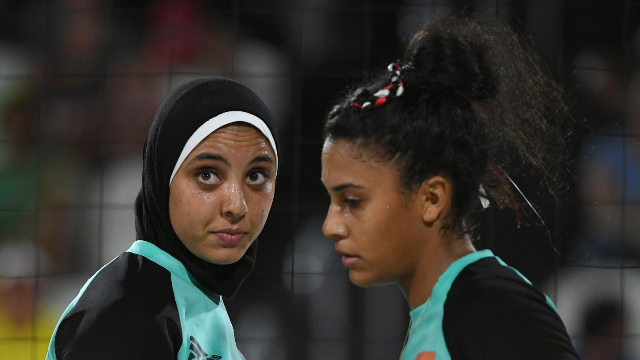 Egypt's women's beach volleyball team might have lost to Germany in their opening pool match – but they have won a greater victory.

Doaa El-Ghobashi and Nada Moawad are the first-ever women from Egypt to make it to the Olympic beach volleyball competition – and though they fell to Laura Ludwig and Kira Walkenhorst, it will be their appearance that the viewers remember.

In 2012, the sport's governing body brought in a rule change allowing players to wear full body suits in cold weather – and plenty took that opportunity in the chill London air in the summer of 2012.

And after a late ruling, El-Ghobashi has been given permission to play veiled, having been very clear that she "double-checked the outfit freedom in this sport before agreeing to join [it]" – and both women are covered up when they set foot on the sand.

Ironically, with all the flesh on show from the men and the women's competitions, it was the Egyptian pair who drew the most stares in Rio with their attire.

And even though they were well beaten by their German opponents, they battled to the end.

El-Ghobashi and Moawad took the African title in 2015 – despite having little international match practice, switching from the indoor version to the beach format.

Beach volleyball gets a bad reputation as a sport not to be taken seriously, as simply an opportunity to ogle. El-Ghobashi and Moawad's arrival on the Olympic stage shows that it is more than that; it offers the opportunity for athletes, of all creeds and colours and countries, to compete and to excel.