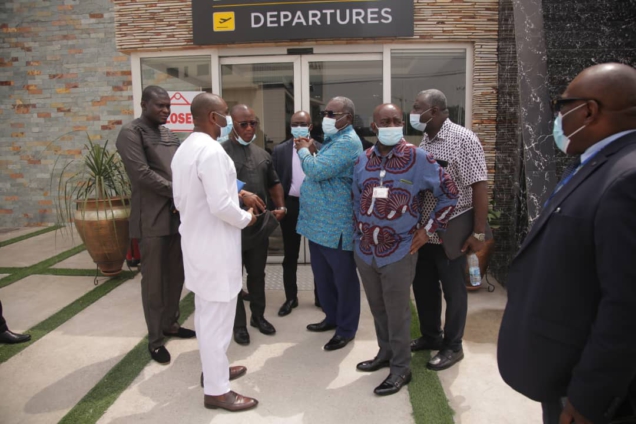 The Parliamentary Select Committee on Transport has expressed satisfaction at the aviation subsidiary of the McDan Group of Companies, McDan Aviation’s private jet terminal at the Kotoka International Airport (KIA) in Accra.

This was revealed by Deputy Minister for Transport, Hon. Hassan Tampuli when the Committee visited the McDan Aviation’s private jet terminal on yesterday.

According to him, the Company has submitted application to regularize the signages and that the Committee from what it had seen so far regarding the installations and physical structure, is satisfied.

He indicated that the Agencies under the Ministry of Transport, Civil Aviation and the Airport Company have so far expressed satisfaction and so is the Committee.

This paper has also gathered that the Ghana Civil Aviation Authority (GCAA) has also given its final clearance to the McDan Group of Companies to operate its Private Jet Terminal at the Kotoka International Airport.

The private jet terminal, located at Terminal One of KIA is expected to deepen the country’s quest as the gateway to the subregion for business and investment purposes.

The Managing Director of GACL, Mr. Yaw Kwakwa in an interview with the media when he took the Committee members round the facility said, the tussle between GACL and McDan Group could have been avoided if the later had met the GACL to discuss matters of concerns as far as the operations of the terminal is concerned.

He however indicated that, the Committee is now satisfied and hence the Company can operate.

DISCLAIMER: The Views, Comments, Opinions, Contributions and Statements made by Readers and Contributors on this platform do not necessarily represent the views or policy of Multimedia Group Limited.
Tags:
McDan Aviation
Roads and Transport Committee of Parliament