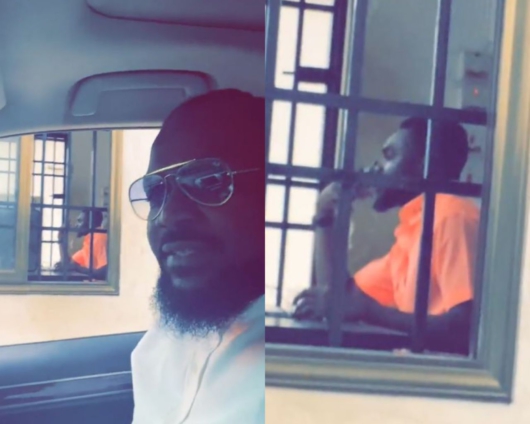 An effort by dancehall artiste, Samini, to court disaffection for a gateman at the University of Ghana seems to have backfired.

The musician posted a video from his vehicle while filming a security man at his post on campus.

According to Samini’s narration, the young man refused him entry because he did not have his electronic card to grant him access as stipulated by the University’s regulations.

I have 2 passes,1 for my bikes 1 for cars.Unfortunately I switched cars and left my pass ..come and see Chirman of gatemen association ooo .Let’s make him popular eeh .The #gatechairman of Legon campus. You do alll.😂eventually some sensible security come to beg Chirman for me😂 pic.twitter.com/TQFJXOhlK5

“I have 2 passes,1 for my bikes 1 for cars. Unfortunately I switched cars and left my pass ..come and see Chirman of gatemen association ooo. Let’s make him popular eeh. The #gatechairman of Legon campus. You do all. eventually some sensible security come to beg Chirman for me,” he wrote on June 10.

It is unclear when the incident took place but the musician added that he was eventually granted access by another official who chanced on the development.

But the reactions to the tweet which was posted on Friday have not been pleasant on the artiste’s part.

Samini paa. Yeah we get it you are famous et al but you should know that letting you in WITHOUT a pass is his CHOICE.

He’s doing his job. Imagine if you had to swipe a card before. You go record the machine? 🤷🏾‍♂️

Social media users have rather called out the public figure for displaying a false sense of self-entitlement.

Others lauded the official for standing his ground, despite the person’s status as an icon.

You don’t have your card, the University has an exit that people in your situation can use but you needlessly do a video to subject someone simply doing his job to public ridicule…you’d later come and complain about laws not working in Ghana https://t.co/0Qbk45dK4v

Popular de33 u make am. Popular for doing his job! This guy needs to be applauded and encouraged for his professionalism. If the statement “there’s grace in disgrace” was a video…

I am disappointed Samini.

He did his job. You do yours as well. Embarrassing and invading his privacy is actually not the way to go. https://t.co/HscOxY9Vl6

The way people are dragging Samini be funny 😂😂😂😂

Who the hell is he? Doesn’t he know Samini is above the law? https://t.co/HHZijP78Je

Even Benzema misplaced his pass during the match against Chelsea at the Stamford bridge and he was refused entry until the card was found. That’s how laws work and it’s due to this kind of mentality that we’re still here today. You’re a musician doesn’t mean the law is below u

Samini Did The Campaign But The NPP Government Always Choose Stonebwoy To Spearhead Their Projects 😊😊.

I think it would be right to fire those who allowed you in, when we are much worried about attack.
University security shouldn’t let that slide.
They did a bad Jon letting y ok u through.