Schandorf's Tales: The Bible school student who slept with a witch - MyJoyOnline.com

Schandorf’s Tales: The Bible school student who slept with a witch 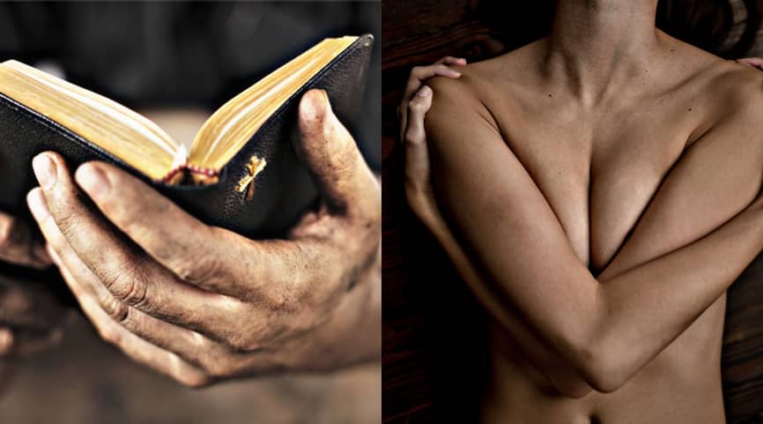 For people in church circles, society believes that their conduct must be perfect.

This is because, they are assumed to be ‘representatives of God’ on earth.

This perception is popular; and at the time Debrah was entering the Bible School, he was fully aware of it.

He knew that by enrolling in the Bible School, he could no longer continue with his drinking habits and untamed appetite for women. But the question was that, was he truly prepared for it?

Debrah was the last of eight children, but the first headache of his mother. Despite his sterling academic performance in school, his behaviour was always up for discussion.

From high school all the way to the university, his name always featured in the list of errant students. It was therefore a surprise when he finally graduated from the university.

But coming out of the university, his mother wanted his bad behaviour to come to a permanent end.

This led to the suggestion for him to be enrolled in the Bible School. His mother believed that by embracing an occupation as a pastor, his unruly behaviour would be refined. Unfortunately, this was never the case. Enrolling as a trainee pastor did not make a good boy out of the recalcitrant Debrah.

On his first day in the Bible School, he made his intent clear. Right after being ushered into his dormitory, Debrah started discussions with a colleague, about one of the ladies, who had also enrolled.

Her name is Anna, and already, Debrah was seriously yearning after her. His eagerness for Anna, was at a time when he was yet to still familiarize with the Bible School environment. That was an affirmation of his unbridled desire for the opposite gender.

After a couple of days, Debrah finally managed to strike a conversation with Anna. It was a brief and casual engagement, but Anna was able to sense the lust in Debrah’s heart. She could tell from his gestures that, he wanted to have his way with her, and surprisingly, she also bought into the idea.

Apparently, the two new Bible School students, had already taken a liking for each other. This was less than a month of their stay in the Bible School; a place where they were required to learn the ways of God and instill it in others.

But instead of that, they had hatched an amorous agenda. Anna and Debrah greed to go out on a date.

As a result, they devised some flimsy excuses to exit the four walls of the Bible School. Anna sought permission on the pretext of attending to some personal emergencies; while Debrah left campus on the grounds of ill health.

Their lies were successful, bringing them together at the Royal Avenue Hotel. Anna’s outfit was colourful and resplendent. She wore a fitting wine attire, which revealed her voluptuous figure and sumptuous physical appeal.

Arriving at the hotel’s reception, she stole the attention of many onlookers, who couldn’t help, but to turn their heads in admiration.

Some men who were sharing a drink at the premises of the hotel gestured at her. But Anna was determined to meet only one person – Debrah; who was already seated at the hotel’s bar, waiting for his new bed mate.

When she arrived, a seamless bond was created between them; and thus without invitation, she reached for a wine glass in front of Debrah, and filled it to the brim. “Do you drink that much?”, Debrah quizzed.

“Well, you already know what the doctors say, but I want to treat you tonight; and this wine will give that energy”, she replied flirtatiously. Her reply projected a lustful smile on Debrah’s face.

He was happy that Anna was on the same tangent with him. Without any further hesitations, he guided Anna, who was by then intoxicated, into the room he had booked earlier.

Climbing the stairs to the room, he placed his two hands on Anna’s waist, while guiding her steps from behind. Debrah’s hands made contact with Anna’s beads, and when she felt the grip, it triggered a weak and soft moan. “Ouch, that was hard”, she reacted.

“Sorry, I didn’t mean to hurt you”, Debrah replied.

“Well, I am not offended actually; I just pray I see the same hardness soon”, she replied.

Shortly after this exchange on the staircase, the two finally landed in the room. It was a well ventilated space with a huge bed in front of them. The sheet on the bed was white, with about six pillows on them.

Feeling already intoxicated, Anna threw herself onto the bed; leaving her thighs uncovered. Anna’s thighs were smooth and fair in colour. From the back of her calf all the way to her feet, there was no single scratch or scar. It was completely spotless and inviting, and Debrah couldn’t resist.

Standing behind Anna, he saw the full glory of her thighs and as she laid on her tummy. As far as Debrah was concerned, the coast was clear; and now was the moment he had been waiting for.

Most men in that situation will readily thrust. But Debrah was an adventurous, yet patient womaniser. Instead of striking the iron while it was hot, he had other fantasies in his lustful head. Standing behind Anna, he slowly went on his knees and started kissing the back of her calf.

He wanted his tongue to have a sensual effect on Anna, and true to his plans, Anna responded as such . “Owww …”, Anna moaned.

Having reached the roof of sexual ecstasy, the two finally lost their cool and delved into the actual pool of passion; kissing and roughly fondling each other. The session lasted for an about an hour, and when it was finally over, Debrah fell fast asleep.

But after the enthralling episode, Anna remained wide awake. She didn’t blink, neither did she shut her eye lids for a second. Instead, she fixed her eyes on the bulb in the room, and suddenly, a rushing mighty wind filled the room.

The wind was boisterous, it started pushing objects to the ground. Debrah, who was by then fast asleep jumped from the bed screaming. The noise and thundering sounds finally woke him up.

“Who are youuuuuuuuuuu? … And what are you doing?”, he yelled!

Anna laughed in a man’s tone; so loud that, it filled the entire room. At this point, Debrah was completely terrified; having discovered that she had penetrated a woman who was not a regular flesh and blood.

Gripped in fear, he rushed to the door to escape the horrifying scene. But upon reaching the door, the door suddenly moved to another side of the wall in the room in a very bizarre manner. The events became scarier, and for Debrah, he was already in hell.

He started sweating profusely; pacing the room in a restless manner. Meanwhile, Anna suspended on the bed, still laughing in the monstrous tone. Debrah’s shouts for help only bounced back in the four corners of the room.

Soon, his lungs could no longer sustain the screaming, and after many effortless attempts to escape, he finally gave up the ghost. Debrah had died.

The boy who had been enrolled into the Bible School to become a clergy was no more. His life had been cut short by a colleague student, who had also enrolled to become a preacher. Clearly, Anna was not human, and her aim was to strike Debrah and bring an end to his life.

Standing by his lifeless body, she praised her efforts and applauded her accomplishments. In a monologue, she repeated her mission of coming to the Bible School, to lure young men and take them to their early graves. That was her goal, and sadly, Debrah had become her first victim.

Having executed her first task successfully, she vanished from the room; with no traces of the earlier disarray she had caused.

The following morning, the hotel attendants came to the room, after not hearing any response from their knocks, they opened the door only to find Debrah dead. Horrified by the scene, they quickly ran out and reported the incident.

Debrah’s body was subsequently conveyed to the morgue. And alas! That was the end of the young Debrah Kingston!

Now as strange as Debrah’s story may sound, there are many Anna’s who have disguised themselves into harmless personalities, walking about in town. As a matter of fact, it is not every face we see on the street that is actually a human being.

Some men we see in vehicles are actually demons, and some women who sell food to us are also foul spirits. We must therefore exercise a lot of vigilance in the people we deal and interact with. I have to admit however that, it will be difficult to distinguish between an actual human being and a demon.

But that is where God comes in. With his guidance, we can sift the wheat from the chaff and escape the path of harm.

A critical analysis of Debrah’s story also reveals a vey important issue. That is the decisions we take. Right from the outset, he knew he did not have the call of God to minister. However, he yielded to the suggestions of his mother, without convincing himself that, the thought was from God.

In wrapping up, we must learn to discern the will of God in the decisions we make. Nothing is more rewarding than that.

Until I come your way again with another edition of Schandorf’s tales, remember to be a useful asset to family, God and country. Ciao!

The author of this piece is a writer, a broadcaster and a corporate emcee (MC), by name Paa Kwesi Schandorf. He is currently with the Multimedia Group, and a nominee for the 2022 BBC World News Komla Dumor Award. You can reach him on 0273141821 or derrick.ayirebi-acquah@myjoyonline.com.