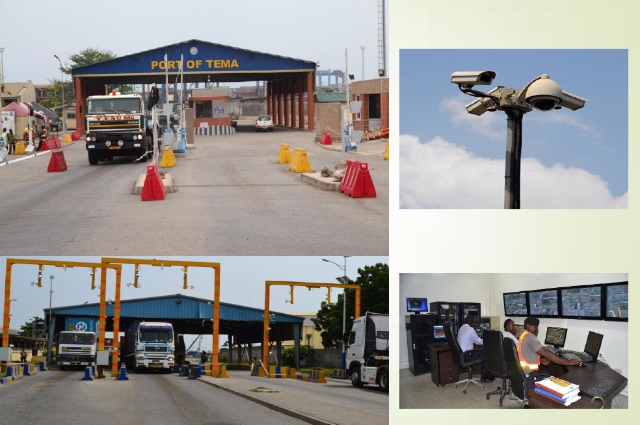 Security at Ghana’s two marine ports is rated high as the Ghana Ports and Harbours Authority invests heavily in modern equipment at the facilities.

Officials say the introduction of automated security systems and regular police and military patrols at the Tema and Takoradi Harbours insulate Ghana’s territorial waters from pirates and other criminals.

The Tema Port, for instance, last year became the last-stop for eight armed Nigerian pirates who were arrested by security operatives without firing a shot.

The suspects had before the arrest managed to hijack an oil vessel, MV Mariam that was carrying about 1,500 tonnes of crude oil on the high seas in Nigeria.

Sixteen Nigerian and Ghanaian stowaways were also arrested later in a security clamp-down.

Acquisition of security equipment such as patrol boats and motorbikes is complementing installation of optical character recognition cameras for monitoring movement of containers.

In addition 160 closed-circuit television cameras have been mounted at vantage points at the Tema Port as officials introduce a lot of automation into the security processes.

All those who have registered to transact business in the port have computerized security ID cards. It means all those who enter the port must combine these Identification cards with personal biometric identification.

Marketing and Public Relations Manager at GPHA, Paul Asare Ansah, tells Nhyira Fm in an interview the situation  means security on both land and sea is water-tight.

“Our security is impeccable and it stands tall in the entire West and Central Africa sub-region. The Port of Tema is covered by 160 Closed-Circuit Television Cameras.  So it would be difficult for somebody to sneak into the port; either to go on a stowaway mission or to go on any diabolical mission”. Mr. Ansah explained.

He says investments made on the acquisition of security equipments are paying off.

“We have invested heavily in purchasing security equipment and security crafts; patrol boats, patrol motorbikes to the extent that security is very versatile both on land and on the sea. And we collaborate so effectively with other security agencies particularly the navy and maritime police through security patrols to ensure that our waters are no go area for pirates, for stowaways, from armed robbers as happening in other ports”. Mr. Ansah revealed.

Ghana’s ports were named the best performing among 22 facilities along the West African Coast at the maiden edition of African Ports Awards in Ivory Coast.

Mr. Asare Ansah attributes the feat to improved systems at the country’s   ports.

“Quality of security that we offer in our port and in our maritime waters contributed to our being awarded as the best performing port in the West African sub-region. We have introduced a lot of automation in our security process to the extent that you cannot just move to the port with the intention to go and steal; you will be arrested”. Mr Ansah emphasized.