Several adoptive parents exposed for trying to 'rehome' their children on Facebook - MyJoyOnline.com 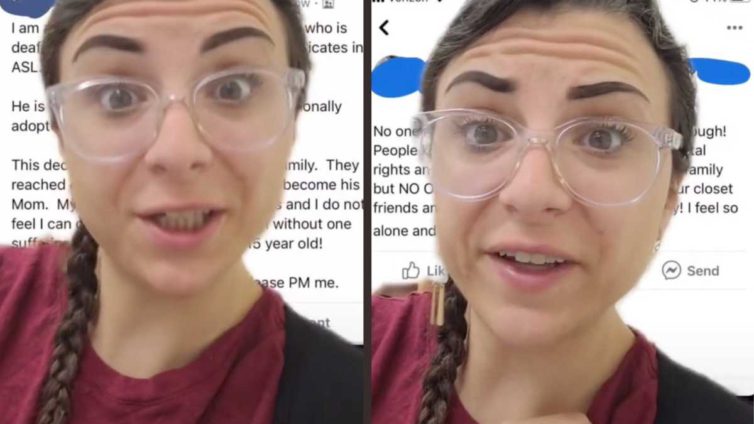 Kirsta, a Greek adoptee, posted a video on TikTok that went viral, exposing adoptive parents who are backtracking on their adoption via a Facebook group.

Parents who adopt and then try to return their adopted children might be taking on more than they are able to and were, perhaps, naive about what it takes to adopt.

One of the posts in the group read, “No one in my life knows what I’m going through! People know we’re battling to dissolve our parental rights and get our AS6 re-adopted into his new family but NO ONE asks us how we’re doing! Even our closest friends and family. It’s a taboo topic apparently! I feel so alone and we’re going broke on legal fees.”

Another post read “What is the best way to find a new family when disrupting/dissolving an international adoption (he has been with us for 10 years)? The agencies won’t help us due to a combination of his age, race, medical issues, and behaviors,” to which Kirsta responded by saying, “How do y’all have a kid for ten years and then decide, you know what, you’re too much for me, I’m gonna get rid of you. What?! How?!”

Interestingly, several of the posts mention that kids have medical issues or disabilities and that might be a reason why the parents want to return the child because they were or are “too much work.”

This is a disturbing look at abelism that exists in the adoption system.

Kirsta mentions most parents re-home their adoptive children based on these reasons: the child’s physical and emotional health, they don’t want the child anymore, and many are due to aggressive behavior and defiance.

Adopted youth are also more likely to be diagnosed with ADHD or ODD which are externalizing disorders that may present challenging disorders.

‘Re-homing’ adopted children can cause trauma.

“Any child that comes from trauma,” which is something you can expect an adopted child to have, “may have explosive behaviors because they do not know how to self-regulate, and they have been through trauma,” says Kirsta.

“That’s a fair chunk of a child’s life, and you’re teaching them that love is conditional and you can be re-abandoned. Further traumatizing a child. And the fact that people try to do this on Facebook, like what?!”

According to research, dissolved adoptions do actually cause trauma and “Approximately 135,000 adoptions finalized every year in the U.S., between 1 and 5 percent of them end up being legally dissolved.”

Adopting a child is also something parents shouldn’t take for granted.

However, out of the 135,000 adoptions estimated by the U.S. Department of Health and Human Services that are finalized every year, 1 and 5 percent of all those adoptions, unfortunately, end in disruption and dissolvement.

Kirsta posted again and found another Facebook group, a public group called “Second Chance Adoptions,” and mentioned the dangers of how posting about re-homing an adopted child can be dangerous.

“I feel like this is a really easy way for predators to just swoop right in. You’re listing off demographics, likes, and interests, their personality, you’re making it so easy for someone to just prey on this child. And I really hate when adopted children get crap for doing things that are typical for them developmentally,” she says.

“Facebook has no issues with these types of posts. You can’t sell chicken eggs, you can’t advertise a horse for sale, but you can advertise kids like this who need a new home?”

Facebook has responded to this in the past with state legislatures across the country, as early as 2015. However, it clearly is still going on.

Rehoming adopted children can put the children in dangerous situations because the rehomed families are not monitored by adoption authorities.

Not only is this dangerous but also extremely traumatizing to the child, as children who are re-homed are more likely to struggle with depression and mood instability.

Families who are looking to re-home their children should seek therapy and work closely with children’s services when putting a child up for re-adoption.

That means not using a social platform like Facebook to do so. Either way, there’s no easy or painless way of dealing with adoption disruption and it ends up being worse for the child.