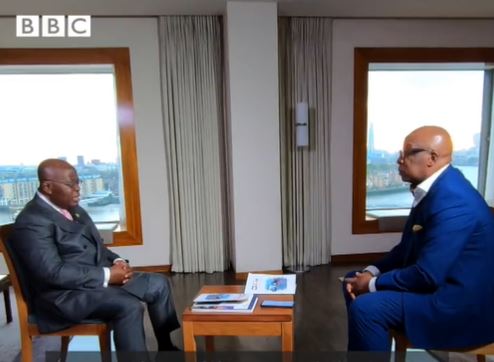 Social media users on Twitter have shared their thoughts on the interaction between President Akufo-Addo and BBC’s Peter Ōkwóchè.

President Akufo-Addo on Monday spoke about the Electronic Transaction levy (E-levy) Bill which has been passed into law, the country’s tourism sector and the Black Stars’ qualification to the 2022 World Cup on the Focus on Africa show.

According to some users, Peter Ōkwóchè must be lauded for asking thought-provoking questions and sharing his view of the Ghana economy – one he describes as “terrible”.

They have gone as far as comparing the work of Ōkwóchè to some journalists in Ghana who have had the opportunity to interact with the President on the state of the economy.

Users say these journalists played to the gallery instead of asking brazen questions.

Justifying the imposition of the E-Levy, President Akufo-Addo said there is the need to tax the industry that deals with transactions where a lot of value is being created. According to the President, the industry he is talking about is not “impoverished.”

“The digital economy is emerging, it’s the biggest economy in the country and for a long period it’s not had any taxation at all and so it is important that they also come into the tax net.

Our country is one of the lowest tax to GDP ratios of any country in West Africa and of an equivalent economy… I don’t know any group of people, especially businesses when taxes are brought to them they like it,” he added.

Reacting to this, users say the President misinformed the public as the levy would be affecting individuals and not an industry.

For a section of the users, President Akufo-Addo aced the interview.