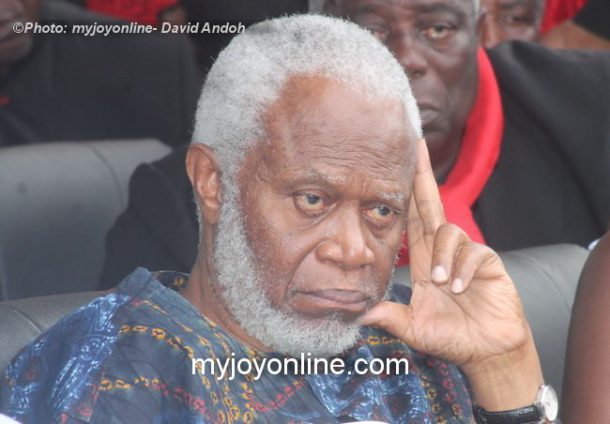 Imagine being holed up in the VIP Spelthorne Suite at Heathrow Airport for three hours with Ghana’s legendary Security Capo – Captain Kojo Tsikata!

Recounting her very first encounter in 1994/1995, Dr. Christine Amoako-Nuama, Minister for Environment, Science and Technology in the Rawlings administration, and later Advisor to two Presidents – Mills and Mahama – will break into laughter at the memory.

“It was very interesting, more for what was not said, than what was, beyond the initial pleasantries!”

Dr. Amoako-Nuama recalled the somewhat anticlimatic silence that ensued. Complete silence for almost three hours, and with no cellular phones to provide a welcome distraction.

Strikingly, Captain Tsikata could not have been ignorant of Dr. Amoako-Nuama’s identity, beyond her role as Minister in the Rawling’s government. As it turns out, Mr. David Afful Bimpong, Dr. Amoako-Nuama’s first husband, had in 1972 been incarcerated by the Acheampong government together with Dr. Ofosu-Armaah for an attempted overthrow of the government.

In prison, they met and forged a relationship with Captain Kojo Tsikata, also arrested on similar charges.

However, on that quiet day at the VIP Lounge at Heathrow Airport, it was all typical Captain Kojo Tsikata fashion – taciturn, not saying more than was necessary, but missing nothing in his environment.

Indeed, Captain Kojo Tsikata’s arrest by the Acheampong government and extensive torture in solitary confinement for the initial six weeks, is recounted in his statement issued to the National Reconciliation Commission set up by President John Agyekum Kufuor.

He narrates the efforts of “a panel chaired by Mr. Francis Poku, at the time a Deputy Superintendent of Police at the Special Branch” to extract, through torture, his confession about the alleged attempted overthrow of the government.

“Once, when I appeared before the Panel, Mr Francis Poku said he had orders from the SMC to beat me to death if I failed to write a confession along the lines he was suggesting and advised me to co-operate, as he did not want anybody’s death on his conscience. When I refused to write such a statement, he got angry, insulted me and asked Sergeant Boateng to take me to a special room upstairs. This was the torture room where I was immediately set upon by Sgt. Boateng, Cpl. Ebo Duncan, and Cpl. Seidu, and severely brutalized until I became unconscious. When I came round, I was lying in a pool of blood in the reception room downstairs. The next morning Mr. Francis Poku visited me in my cell and, pretending to apologize for what had happened the previous day, said that he had no alternative as he was under pressure from the SMC to get a confession from me.”

Fast forward to 2008 when Dr. Christine Amoako-Nuama and Captain Tsikata’s paths crossed again. This time, the encounter will be far more significant. What that first meeting failed to accomplish by way of an animated discussion, this second encounter more than made up for in a shared purpose – that of bringing Professor John Evans Atta Mills and the National Democratic Congress back to power after eight years in opposition.

“Back in 2008, Captain had decided that some women in the NDC had to be responsible for certain critical aspects of the campaign of our Flagbearer John Evans Atta Mills. He had also decided apparently that our victory in 2008 will be on a DEVELOPMENT AGENDA for Ghana,” narrated Dr. Amoako-Nuama.

Mrs. Cecilia Johnson, Ms. Hannah Serwaa Tetteh, Mr. Larry Adjetey, the late Mr. P.V. Obeng and many others were all later drafted into the Atta Mills Project. Dr. Amoako-Nuama along with Mr. Kwamena Ahwoi, the late Mr. P. V. Obeng, Mr. Sam Garba and some others were tasked to oversee the Manifesto Drafting process.

These initiatives kick started a series of intense Policy discussions that resulted in the NDC’s 2008 Manifesto and eventual electoral victory.

Afterwards, Dr. Amoako-Nuama will be appointed a Presidential Advisor and specifically tasked with overseeing the establishment of two new Universities in Ghana, the University of Health and Allied Sciences and the University of Energy and Natural Resources, tasks she successfully executed in 2012 when both Universities kicked off.

As later events showed, Captain Tsikata’s selection of Dr. Amoako-Nuama was strategic. Being an academic and a deeply religious person – a practicing Christian – Captain accurately predicted the strong bond Professor Mills, himself an academic and a man of strong Christian faith, will form with “Christie.”

So close did candidate Mills and Dr. Amoako-Nuama become infact, that among other things, they would spend time together seeking the face of the Lord in Prayer for divine provisions for Ghana.

Dr. Amoako-Nuama, Captain Tsikata and Mr. P. V. Obeng also used to meet at the offices of the National Development Planning Commission (NDPC) at the time when P.V. Obeng was NDPC Chair to reflect on Ghana’s long term development paradigm.

Interestingly, Professor Mills’s sudden passing in July of 2012, rather than separate them, brought Captain Tsikata and Dr. Amoako-Nuama closer.

At the time trying to decipher her role, if any, in the government of President John Dramani Mahama, Captain Tsikata initiated weekly meetings during which he offered her thoughtful guidance and significant material support.

“After Prof died, that was when I got closer to Captain. That was during H.E. Mr. Mahama’s presidency. I literally met with Captain every week. On his porch, I will drink pots of tea. We would then discuss the work I was doing with the Universities, the growth of the NDC and the development of Ghana,” reminisced Dr. Christine Amoako-Nuama.

Given Captain Tsikata’s fearsome reputation as a security capo, had she ever been terrified to meet him? Ultimately, how would she remember the man she simply referred to as “Captain” who called her “Christine?”

“There was nothing fearful about him. I could even discuss matters of Christian faith with him. When I did, he would simply laugh without saying much. For me, he was like a SENIOR mentor, a thoughtful person, and a great support especially when Prof. died.”

Sodzi Sodzi-Tettey is the Council Chairman of the Centre for Social Justice, an Accra based think tank.