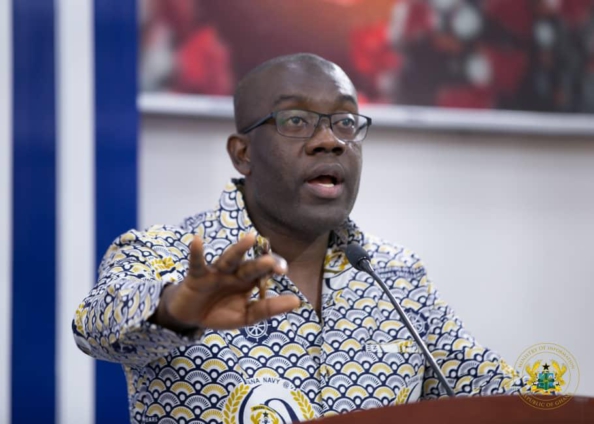 The Information Minister says President Akufo-Addo’s failure to speak about casualties recorded in the December 7, election in his last State of the Nation Address is being blown out of proportion.

Kojo Oppong Nkrumah believes the attention paid to this development in Tuesday’s speech in Parliament is not necessary.

This comes on the back of the Minority’s description of the President’s inability to highlight the event as insensitive and an affirmation of their allegations of violence and rigging on the part of the governing New Patriotic Party (NPP).

Six persons died across the country due to violence that erupted at various parts of the country during the electioneering process which saw Nana Akufo-Addo emerge as President-elect.

The deaths include 15-year-old, Rita Otoo, from the Odododiodoo Constituency at Accra who was also and killed during violence that flared up in the area leaving her parents traumatized.

But speaking on PM Express Tuesday, Kojo Oppong Nkrumah explained that the Minority is blowing the President’s silence out of proportion.

“Specific to the matter of whether or not he should have mentioned persons who lost their lives during the recently ran election, you will find people with different views on it. That for me itself is not even such a big deal.”

According to him, the President has, on numerous occasions, highlighted the incident amid ongoing concerted efforts by state security agencies to bring the perpetrators to book.

He added that; “I’m not sure that the President not specifically mentioning it takes away from the record of what has happened in times past.”

In view of this, he believes the President’s inability to, during his last address to the nation’s 7th Parliament, mention the deaths recorded does not merit a storm in a teacup.

Meanwhile, Member of Parliament for Tamale North begs to differ.

Alhassan Suhuyini told host Evans Mensah that a mention by the President at the national address would have served as some form of consolation for the families of the deceased.

“These are people who are breadwinners who are looked up to in their families with a lot of expectations… Even if the President didn’t mean it would have just been appropriate for him to commiserate with the family and give them the assurance that it will be investigated thoroughly and the culprits if found, will be dealt with,” he said.

He, however, rules out the possibility of an oversight in the matter which he describes as unforgivable.

DISCLAIMER: The Views, Comments, Opinions, Contributions and Statements made by Readers and Contributors on this platform do not necessarily represent the views or policy of Multimedia Group Limited.
Tags:
Deaths
Election 2020
Kojo Oppong Nkrumah
Nana Akufo-Addo
State of the Nation Address