South American referee suspended after failing to give red card 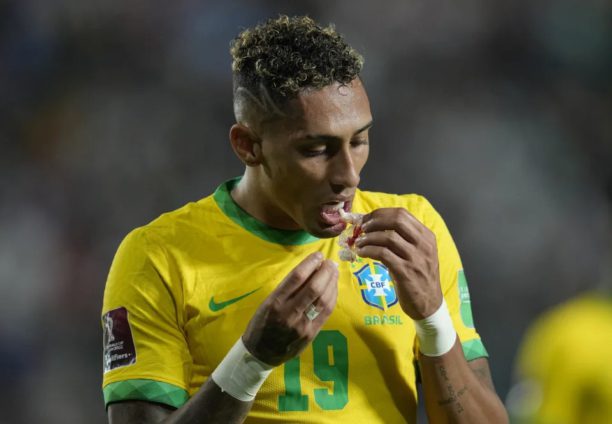 Uruguayan referee Andres Cunha and video assistant Esteban Ostojich were suspended Wednesday after failing to give a red card to Argentina defender Nicolas Otamendi during a World Cup qualifying match against Brazil.

Otamendi hit Brazil forward Raphinha with his elbow in the 35th minute of Tuesday’s match in San Juan. The Brazilian needed five stitches at halftime and still continued to bleed in the second half.

“It looks like a foul for a yellow card. I don’t see a red,” Ostojich told Cunha, according to a video released Wednesday by South American soccer body CONMEBOL.

Otamendi wrote on Twitter he had only touched the ball.

The match ended in a 0-0 draw, which was enough for Argentina to qualify for next year’s World Cup in Qatar. Brazil had already qualified for the tournament.

CONMEBOL said in a statement that Cunha and Ostojich committed “a serious mistake” and the two were suspended for an “indefinite time.” The Uruguayan referee was removed from the VAR booth for Saturday’s Copa Sudamericana final between Red Bull Bragantino and Athletico.

Neymar put his chest close to Tobar’s during that match in Sao Paulo, but the Brazilian wasn’t booked. Cuadrado illegally used his arm later in the game and also wasn’t carded.

The Brazilian soccer confederation said it will seek punishment for Otamendi at FIFA’s disciplinary committee.

“It is simply impossible not to see Otamendi’s elbow on Raphinha,” Tite said. “Was that going to decide the match? I don’t know. It was a great match, but there is an element (missing) that should be equal for both teams.”