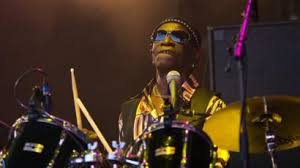 Fans and fellow musicians have been paying tribute to afrobeat pioneer Tony Allen who has died in Paris at the age of 79.

Beninese singer Angelique Kidjo called the legendary drummer “a beautiful spirit and friend” who “changed the history of African music”:

Bye bye Tony Allen, beautiful spirit and friend who has changed the history of African music. I was so lucky to work with you on my last 2 albums. Sending lots of love to his family and friends. @allencodrum

Ghanaian rapper M.anifest tweeted that Allen “put the beat in Afrobeat” and thanked him “for a lifetime of being quietly epic”:

You put the beat in Afrobeat. A giant. Rest in paradise and thank you for a lifetime of being quietly epic. Honored that some of my most memorable times on this journey were in studios and on stages with you. Journey well Tony Allen 🕊🖤 pic.twitter.com/1XzkFoeZQd

His longtime collaborator Fela Kuti, who died in 1997, once said that “without Tony Allen, there would be no Afrobeat”.

One of his sons Seun Kuti, a celebrated musician in his own right, tweeted on Friday “rest in power and journey well”:

British musician Brian Eno has described Tony Allen as “perhaps the greatest drummer who has ever lived”.

It’s a sentiment shared by many of Allen’s fans, including Butshilo Nleya who wrote “rest in power to the [greatest of all time]”: