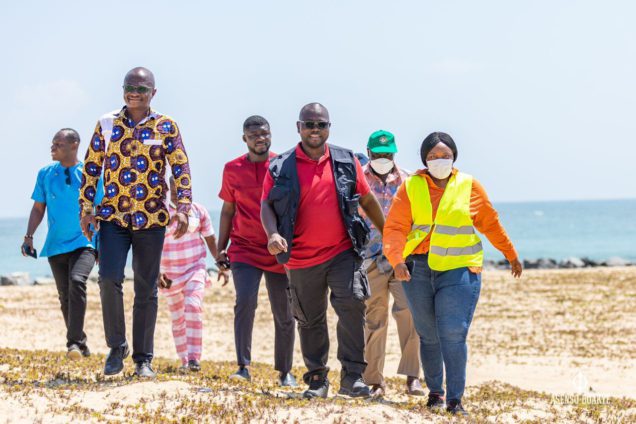 The Minister for Works and Housing, Francis Asenso-Boakye has expressed grave worry about the heavy politicization of the issue of tidal waves and its devastating effects on the lives of the country’s coastal dwellers.

The issue, the Minister indicated is a national problem that should be devoid of every temptation by political watchers especially politicians to score cheap political points with such occurrences, adding that such narratives are not only acts of dishonest but also a great disservice to the affected people.

The Works and Housing Minister made these statements when he visited communities of Ada and Sege in the Ada East and West Districts respectively that have been adversely affected following the incidence of heavy tidal waves in coastal parts of the country in the past few days.

In recent times, the country’s coastal residents especially Volta and Greater Accra regions have had to bear the brunt of the incessant effect of climate change, leaving in its wake the destruction of communities.

The Minister for Works and Housing Francis Asenso-Boakye gave the assurances that government will soon secure the needed funds to complete coastal protection works on sections of the country’s 550km coastal stretch that remain at risk and possesses a threat to the life and properties of coastal dwellers.

Following extensive discussions with the Finance Ministry, the Minister said he was very optimistic that government will soon raise the necessary funding to implement the needed mitigation measures against the increasing threats of tidal waves.

The Minister said government takes the threat of coastal erosion and flooding seriously, adding that, it is the reason why huge financial investments in various sea defence projects across the country are being made to alleviate the plight of coastal dwellers.

“I can assure you that the government will do everything possible to assist you to recover from this unfortunate and traumatic experience.” The Minister assured.

While government is making these efforts, the Minister reiterated the need for human activities that expose our coastline to an increased rate of erosion as well as increased risk of flooding to be halted.

The Minister visited the communities in the company of the District Chief Executives of the two districts, the technical team from the Hydrological Services Department, and other officials from the Ministry.