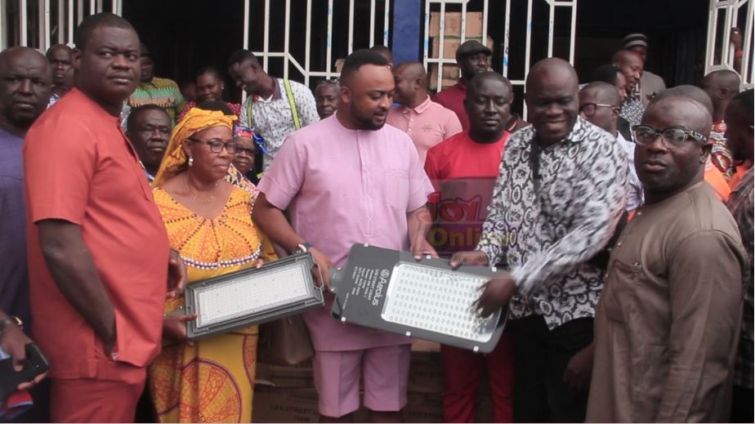 The Member of Parliament for Tafo/Pankrono Constituency has presented approximately 300 street lights to the various electoral areas to combat insecurity.

The donation was made as part of efforts to significantly improve the security system in the Constituency, particularly at night, in order to drastically reduce the number of theft and robbery cases.

According to Vincent Ekow Assafuah, security has been a major challenge for the Constituency for some time, and there is a need to implement stringent measures to address it.

“All those who have followed this Constituency since the inception of the 1992 democratic dispensation, will attest to the fact that security, especially for those in Pankrono and environs, has been one of the biggest nightmares in the Old Tafo Constituency.”

He said that whenever he visits a household in the Constituency, particularly in Pankrono, they will never express any grievance without mentioning security, and that this has become one of his most difficult challenges.

In order to improve security even further, the MP has funded the construction of a Police Station in Pankrono, which is expected to be completed in a few months.

Mr. Assafuah said he is committed to addressing all of his constituents’ security concerns through the various steps he has put in place.

Mr. Assafuah thanked the people of Pankrono for the four-year term they have given him.

The Municipal Chief Executive of the Tafo Municipality Assembly thanked the MP for his dedication to the area’s development.

Lord Inusah Lansah said the donation came as a huge relief to the Assembly because they had been unable to provide street lights to some areas that were in desperate need of the service.

Mr. Lansah pointed out that while some light bulbs were purchased in October of last year, they were insufficient to cover the entire municipality.

“We procured about 400 pieces in October, [and] distributed to all the electoral areas but it wasn’t enough. About three months ago, we again procured some few ones, so when I heard the news that the Member of Parliament is going to distribute street lights I was so much happy.”

According to Mr. Lansah, the street lights will go a long way toward combating crime throughout the municipality.

He cautioned residents to take personal security seriously and not rely solely on security agencies to help reduce the spate of crime in the area.

Nana Pipim, Assembly Member for the Pankrono Estate Electoral Area, commended the MP on behalf of the members.

He said that the move will significantly help to reduce crime in their electoral areas.

Meanwhile, a number of roads constructed by the government were inspected.

According to the MP, the government has completed a number of roads in the area totaling about 23.5 kilometers.