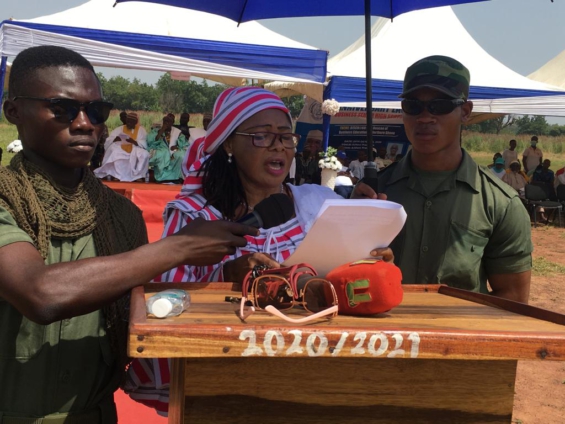 The Headmistress of the Business Senior High School (BISCO), Susanna Pharti Braimah has appealed to the government to provide the School with more furniture.

The existing ones, she said are inadequate for the about 2,387 student population.

She said continuing students are forced to stay out of classes any time the final year students are writing exams and they need to bring them together at a time.

This, she said, is affecting quality teaching and learning.

“The school also has inadequate furniture which often makes it difficult for classes to be going on for continuing students when the final year students are writing both mock and final exams,” the Headmistress noted.

Delivering a speech at the launch of the school’s 60th anniversary, Susanna Pharti Braimah further appealed to government to construct an additional girls’ dormitory to ease the congestion for the over 1,000 girls.

“The many things the old students and government have done for the school, and the many successes chalked by the school doesn’t mean it has no challenges, the school needs an additional girls dormitory as the population of girls is gradually outweighing the existing dormitory,” she said

The Headmistress again appealed to the government to officially hand over the newly constructed dining hall and kitchen facilities to the school for use.

She said the old dinning hall can no longer accommodate the growing population of students, the reason the new one was built, adding that the kitchen staff equally need a conducive and hygienic space for cooking.

“We will also be grateful if the newly completed dinning hall and kitchen facilities could be officially handed over to the school,” she requested.

She also raised concerns over accommodation for the staff, stressing that most of the bungalows have outlived their usefulness and many are infested with snakes.

“The school has inadequate staff bungalows, the few that we have deteriorated and this is the school that is infested with so many snakes.”

On some of the achievements the school has chalked in recent times, Susanna Pharti Braimah said the school is one of the best in the region, producing hundreds of graduates into tertiary institutions across the country.

“The school has been one of the best secondary schools in the country since its establishment, churning out hundreds of students each year to feed tertiary institutions across the country and even outside Ghana,” she added.

According to her, the school emerged the best in the Biennial Senior High School Festival of Arts and Culture both in 2014 and 2016 respectively, representing the region at the Nationals.

The Headmistress said BISCO emerged as the regional and zonal champions in this year’s Energy Commission’s Renewable Energy Contest and placed 4th runner up at the national level.

She added that after barely two years of introducing science courses in the school, BISCO has already featured in the NSMQ twice at the national level.

She commended government for constructing a new administration block and classrooms for the school in addition to the old ones.

Susanna Pharti Braimah also thanked the Old Students Association of the school for establishing a sick bay and a science laboratory for the school.

The Municipal Chief Executive of Sagnarigu, Yakubu Ahmed Mohammed, delivered a speech on behalf of the Northern Regional Minister, Alhaji Shani Alhassan Shaibu on the theme; “BISCO at 60, the beacon of business education in Northern Ghana” said providing business education is crucial for national development.

“As we continue to seek expertise and constructive suggestions on improving the economic fortunes of our country. Indeed the current global economic meltdown requires that business students are brought to test with the challenging global economic business trends away from the exodus business model,” he stated.

He said the government will do its best to address the challenges of the school and called on the old students association to support in addressing some of the challenges.

The President of the BISCO Old Students Association (BOSA), Alhassan Musah pledged the association’s commitment to helping address some of the challenges of the school.

“The old boys and girls are rallying to execute some signature projects during this anniversary and beyond, and very soon you will see us here to tackle some of the projects.”

DISCLAIMER: The Views, Comments, Opinions, Contributions and Statements made by Readers and Contributors on this platform do not necessarily represent the views or policy of Multimedia Group Limited.
Tags:
BISCO
Ministry of Education
Tamale Business Senior High School