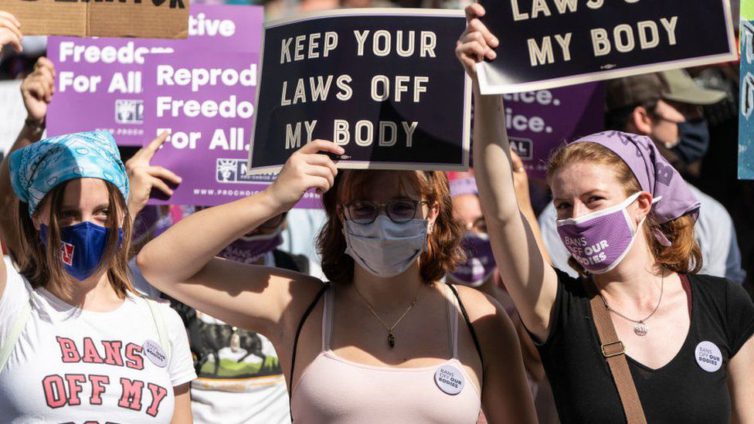 A US appeals court has temporarily reinstated Texas’s near total ban on abortions.

The Fifth Circuit Court of Appeals agreed to a request from Texas Attorney General Ken Paxton that an injunction imposed against the law be lifted.

On Wednesday, a lower court had temporarily blocked the bill for the “offensive deprivation” of the constitutional right to an abortion.

The restrictive law bans all abortions at about six weeks of pregnancy.

It gives any individual the right to sue anyone involved with providing or facilitating an abortion after foetal cardiac activity is detected, and makes no exceptions for pregnancies caused by rape or incest.

On Wednesday District Judge Robert Pitman granted a request by the Biden administration to prevent enforcement of the law while its legality was being challenged. He held that women had been “unlawfully prevented from exercising control over their lives in ways that are protected by the Constitution”.

However, Texas officials immediately appealed against the ruling, which the New Orleans-based, conservative-leaning Fifth Circuit court has agreed to set aside. It ordered the justice department to respond to its ruling by Tuesday.

In a statement following the latest ruling, Nancy Northup, president of the Center for Reproductive Rights, called on the Supreme Court to “step in and stop this madness”.

“Patients are being thrown back into a state of chaos and fear, and this cruel law is falling hardest on those who already face discriminatory obstacles in health care, especially Black, Indigenous, and other people of colour, undocumented immigrants, young people, those struggling to make ends meet, and those in rural areas,” she said.

“The courts have an obligation to block laws that violate fundamental rights.”

Meanwhile, Attorney General Ken Paxton said the court’s decision was “great news” and added that he would “continue to fight to keep Texas free from federal overreach”.

The dispute over the law could ultimately end up before the US Supreme Court, which in September declined to hear an emergency case filed in a last-minute bid to prevent the ban passing into law.

Several clinics in Texas had resumed providing abortions to patients who were beyond the six-week limit following Wednesday’s order.

They may now face some legal risk, as the law includes a provision that says clinics and doctors may still be liable for abortions carried out while an emergency injunction is in place, legal experts say.

However, it is unclear whether such a provision can be enforced, with Judge Pittman saying in his ruling that it is “of questionable legality”.

Some women have reportedly been travelling to other states where the procedure is legal.