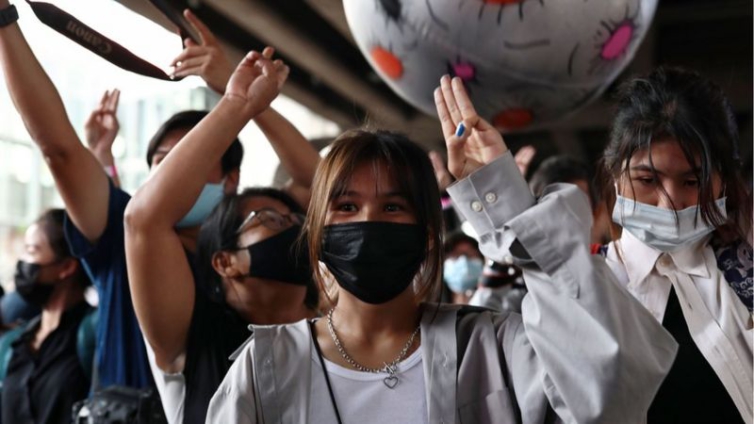 Thailand has revived a controversial law against criticising the royal family in an attempt to curb months of anti-government protests.

Several activists have been summoned to face charges under the lèse-majesté law, which carries a sentence of up to 15 years in prison for each count.

It is the first time in over two years that such charges have been filed.

Thailand has been rocked by student-led protests for months, with demonstrators demanding changes to the monarchy.

Protesters are also calling for constitutional reforms and the removal of the country’s prime minister.

On Tuesday, a prominent student activist, 22-year-old Parit Chiwarak, said he had received a summons for lèse-majesté – among other charges – but that he was “not afraid”.

“The ceiling has been broken. Nothing can contain us anymore,” he tweeted, along with a photo of the summons.

Six other key protest leaders, including human rights lawyer Anon Nampa and Panusaya Sithijirawattanakul, are expected to face the same charges, according to reports.

Thailand’s lèse-majesté law, which forbids any insult to the monarchy, is among the strictest in the world.

The reintroduction of charges under the lèse-majesté law comes ahead of a planned demonstration on Wednesday at the Crown Property Bureau, an institution that controls the royal fortune on behalf of the monarchy, located in the capital, Bangkok.

There have been no lèse-majesté charges filed in recent years at the request of King Vajiralongkorn, according to the Thai government. This latest development follows increasingly outspoken criticism of the king by protesters.

King Vajiralongkorn has been criticised for spending much of his time in Germany.

Protests have included demands to curb recently expanded powers to the monarchy and have challenged the king’s decision to declare Crown wealth as his personal property, making him by far the wealthiest person in Thailand. It had until now been notionally held in trust for the benefit of the people.

There have also been questions over King Vajiralongkorn’s decision to take personal command of all military units based in Bangkok – a concentration of military power in royal hands unprecedented in modern Thailand.

Last week, at least 41 people were injured after clashes between protesters and police in the Thai capital, Bangkok. Protesters were attempting to reach parliament, where lawmakers were debating possible changes to the constitution.

They hurled smoke bombs and bags of paint at police, who retaliated with water cannon and tear-gas solution.