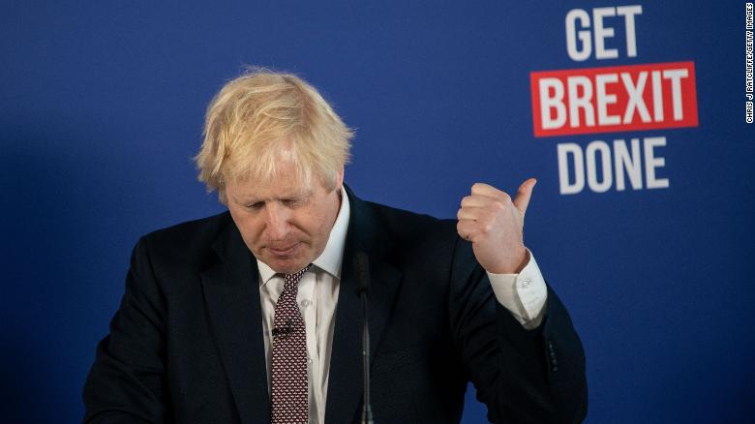 Boris Johnson has spent decades agitating against the European Union and the last five years battling to free the United Kingdom from the shackles of regulation from Brussels.

Now he’s in the awkward position of finding himself at the mercy of EU leaders for permission to rejoin an international treaty, or risk devastating Britain’s multi-billion-dollar legal services industry.

The agreement in question is called the Lugano Convention, and essentially it establishes the jurisdiction of national courts, guaranteeing the legal recognition and enforcement of a wide range of civil and commercial judgments in cross-border disputes.

London is widely regarded as the global capital for international dispute resolution, thanks to England’s world-class legal system and courts.

It is a broad and highly lucrative industry, dealing with everything from family disputes to international business operations.

And a long-term failure to rejoin the Lugano Convention could represent a grave threat to the UK’s world-beating legal services sector, as well as creating difficulties for large companies and ordinary people alike.

The UK dropped out of the treaty as a consequence of Brexit, and applied to rejoin in April 2020.

Yet, while the non-EU signatory states (Iceland, Norway and Switzerland) agreed to its re-admission, to date the European Commission has recommended that the EU deny this request, and said that the bloc was “not in a position” to give its consent to UK accession.

This is tricky for the British prime minister, both politically and economically. According to the Law Society, legal services added nearly £60 billion ($83 billion) to the UK economy in 2018, while in 2017 exports of legal services hit £5 billion ($6.9 billion).

Scott Devine, from The City UK, a body representing UK-based financial and professional services, says the legal services sector employs over 350,000 people, with two thirds of those jobs outside of London.

These positions are not all in major commercial law firms. The sector, Devine says, “is anything from a big multinational law firm” working on international contracts and mergers to “the high street solicitor sole operator dealing with family issues,” such as wills and property.

The reputation of English law has, Devine says, made it the “preferred law of business and international contracts.” According to Devine, in 2019, 77% of claims issues in the commercial court had one party from outside England and Wales, while 43% were based entirely externally.

Some of Brexit’s most ardent critics are concerned that the failure to join Lugano and the poor relationship between the UK and European countries following Brexit could diminish the standing of this important sector.

Dominic Grieve, the former attorney general for England and Wales, says his concern is the long-term “viability of London as a center for dispute resolution.”

He continues that the longer it goes on, “the more potentially damaging it may become, because there’s no doubt that the UK, when it was in the EU, was seen as the place of dispute resolution of choice for EU litigation of every conceivable kind.”

One problem London now faces is that outside of the convention and no clear sign of a decision any time soon, EU nations can directly compete with the UK capital for business.

“The alternatives are slowly becoming clear for international companies that want to operate in the EU and don’t want any blockages,” says Josep Galvez, a former Spanish judge admitted to the English bar at Del Canto Chambers in London and Galvez Pascual in Spain.”

This Lugano limbo the UK finds itself in is the worst situation possible as lawyers on both sides have no clarity on what will happen in the long term. I think the EU wants to make the UK suffer and give EU jurisdictions the opportunity to take business from England.”Galvez believes that over time, more difficulties will arise that could undermine confidence in English courts.

He points to a recent decision in a Swiss court, where an English ruling was not upheld, which he believes shows “the rough ride ahead for UK judgments to be enforced across Europe … I’m afraid Brexit has brought a goat trail where there was a highway for UK judgments.”Others are more optimistic. Devine says that “the confidence in our judiciary” which is seen as “incorruptible” and “experts in the commercial field” should mean the UK retains its appeal.However, Devine and others have wider concerns about the UK’s status outside of Lugano.

Catherine McGuinness, policy chair at the City of London Corporation, thinks that the biggest losers will be individuals seeking justice as consumers or in their personal lives.

“I’d be more concerned about the implications for ordinary people, and smaller businesses operating cross border,” she says, adding that very big firms will be able to amend their contracts to ensure they still work.

“It’s the person who’s buying something across borders or considering how to divorce their partner across borders who’s going to find that they don’t have access to this really pragmatic route to clarify their legal situation.”

Sarah Garvey, chair of the Law Society’s Private International Law committee, agrees that the strained political relations between the UK and EU won’t have as negative an impact on big commercial contracts, but could severely harm those seeking legal recourse as consumers or in family disputes.

“There was initial concern amongst commercial parties that English judgments would be more difficult to enforce in the EU. But they have been reassured by the UK rejoining the Hague Convention and have been adapting their contracts.”

Alongside the high business, reputational and individual costs, for Johnson himself, there is also strong potential for personal embarrassment. It would be a political nightmare for the UK’s prime minister, an architect of Brexit, to be seen as at the mercy of the very Eurocrats he claims to have saved Brits from in 2016.

“It’s politically uncomfortable for Johnson that the EU is starting to react to what it sees as our bad behavior,” says Anand Menon, professor of international politics at King’s College London.”Lots of Brexiteers said from the start of the Brexit process that London taking a hard-line stance wouldn’t result in retaliation from Brussels. This is one of the first examples where we are being damaged internationally and the EU holds the keys, and it gives us an idea of how much they think our reputation has changed,” he adds.

This standoff does appear to be driven by political disputes between the UK and the EU, and critics of both sides are quick to point out that the people this most affects are British and European citizens.

“In cases that involve victims of corporate human rights abuses, business-versus-consumer cases, and family law — in those cases, the party that has more financial resources may try to introduce arguments about which country should be hearing the case, and whether a UK court judgment can be enforced,” says Zach Meyers, a research fellow at the Centre for European Reform.

“I think that the Commission’s being short sighted by treating this solely as a way to withhold a favor from the UK, because this doesn’t just negatively affect the UK, it will affect EU nationals too.”Unfortunately, relations between Brussels and London are dire.

The UK is currently trying to renegotiate a key part of the Brexit deal that Johnson himself signed in 2019, which is uniting EU member states against the UK once more.

The UK government’s official position remains that it wants to rejoin Lugano. Downing Street says convention is not something that should be policed by the EU and the UK should be admitted as soon as possible. Less humble request to join, more anger at Brussels trying to punish it for Brexit.

A Downing Street spokesperson told CNN: “We maintain that we meet the criteria for accession both because it is open to countries outside the EU and all non-EU members already supported the UK’s membership. Supporting UK accession is the sensible and pragmatic solution for all citizens.”

This incredibly important issue is likely to rumble for some time. It might not be as exciting as sausage wars or fishermen ramming each other’s boats, but over time, the consequences of a poor relationship between London and Brussels will become much more obvious to citizens on both sides.The question for both parties now: how long can you maintain political stances that ultimately harm your own citizens for the sole purpose of saving face and making a point?

DISCLAIMER: The Views, Comments, Opinions, Contributions and Statements made by Readers and Contributors on this platform do not necessarily represent the views or policy of Multimedia Group Limited.
Tags:
Boris Johnson
European Union
Explosive Brexit
UK economy