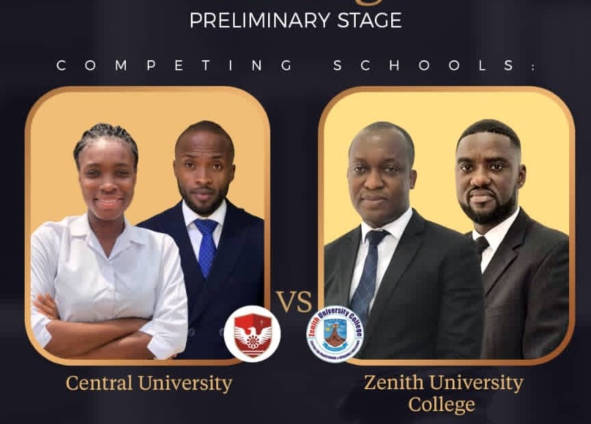 Sunday’s edition of The Law Challenge saw Central University and Zenith University College compete at the preliminary stage of the competition.

The competition saw the students battle each round for a spot at the next stage. It was hosted by a private law practitioner and host of JoyNews’ The Law and Newsfile, Samson Lardy Anyenini.

By the end of round one, Central University led the competition with 38 points. Zenith was five points behind them with 33 points.

But, by the end of the competition Zenith University College won with 128 points and Central University finished with 83 points.

The Law Challenge is aimed at strengthening the connections with regard to the law, legal education, the business community and the society at large.

It is staged in three rounds; the Preliminary, Semi-Final and the Grand Finale which would feature a Moot Court Session.

‘The Law Challenge will focus on areas including Constitutional Law, Criminal Law, Law of Torts, Ghana Legal Systems, Law of Contract and Law of Immovable Property.

While generating a competitive spirit and healthy academic rivalry among law faculties in various tertiary institutions, the show will also contribute to the development of good lawyers who will live up to the roles expected in the social, political and economic advancement of society.