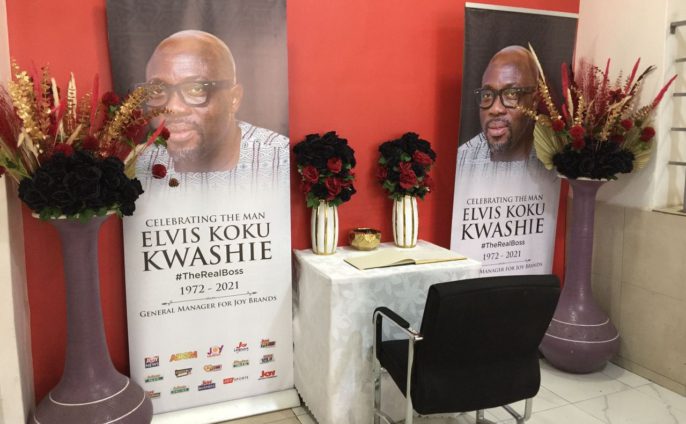 The Multimedia Group Limited has opened a book of condolence for the late General Manager of Joy Brands, Elvis Koku Kwashie.

Sympathisers and loved ones are invited to the premises of Joy FM to sign the book.

Several renowned people in the country have since been commiserating with the family and eulogising the late media practitioner.

Family of the late Elvis Kwashie have also shared their fond memories of the man they so loved and cherished.

According to them, he was the spiritual leader of the family and also served as an inspiration to them, not forgetting about childhood memories of him.

Until his painful demise, the family recognised him as a great pillar that held them together, describing him as a problem solver.

“Koku has been such a wonderful person from childhood. He was so jovial, very much reserved and has been a pillar to this family. We are trusting God that during this time, he will see us through.”

“It’s a very devastating news because after my father passed on two years ago, everything [was] handed over to Elvis, my brother who was our spiritual leader, and our everything.”

“He calls himself a problem solver so whenever there is an issue, my mum always says, ‘wait Koku will come’’ and once Koku comes, there’s a solution to the problem. We thank God for giving him to us. As kid, I was very close to him, he was not just my brother; we were friends as well,” he recalled.

“He was always correcting us, even my dad so [after] becoming an editor, I was not surprised at all. I find it extremely difficult to refer to him in the past.”

Maternal uncle of the late Elvis Kwashie, Rev Joshua Dzidzornu recounted how adorable Elvis was as a child and how he grew to become a disciplinarian and wonderful nephew he has always been proud of.

He remembered how good Koku was to the family and even the extended family as well as everyone around him.

DISCLAIMER: The Views, Comments, Opinions, Contributions and Statements made by Readers and Contributors on this platform do not necessarily represent the views or policy of Multimedia Group Limited.
Tags:
Book of Condolence
Elvis Koku Kwashie
The Multimedia Group