'The reality is that the journalist's salary is not the best' - Francis Abban - MyJoyOnline.com 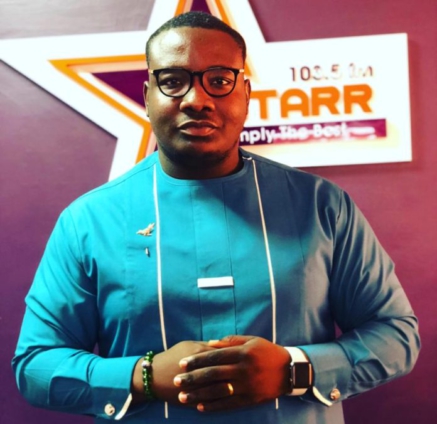 A broadcast journalist and programmes manager at Accra-based Starr FM, Francis Abban has admitted to the low income levels of journalists across the country.

According to him, based on his experiences as a regular employee and a manager, there is the need for the compensation of journalists to be reviewed, especially those who work with private media houses.

Speaking in an interview with Evans Mensah on PM Express on Wednesday, he noted that, many private media outlets predominantly rely on adverts as their source of revenue; a situation which accounts for the meagre earnings of many journalists in Ghana.

“The reality is that, the journalist’s salary is not the best. There’s a lot of room for improvement relative to the take home for many journalists. And I am sure that is the reality that a lot journalists can relate to, today”, he stated.

In his submissions, he added that, unlike those who work with private media firms, journalists who are employed with the state media earn better wages, due to their membership of labour unions, which champion their interest.

“For the state media, some of them have a certain element of unionisation somewhat. Where they have a certain means of which they’re able to collectively bargain and have a good threshold they’ll be able to say this is the standard price.

But the reality in the private media is that negotiation for salaries is done on a person to person level. The value you bring in and what you’re able to defend, and based on your performance matching your KPI’s, you’re able to negotiate for what you’re worth”, he explained.

Mr. Abban made these comments, while contributing to discussions on “The Press Freedom Index: A Reality Check”. The discussion was on the back of a 2022 report by the Reporters Without Borders, on press freedom in Ghana.

According to the France-based NGO, Ghana has dropped 30 places in the latest press freedom index put together by Reporters Without Borders for 2022.

The report, which was released to commemorate international Press Freedom Day, 2022, scored Ghana 67.43, placing Ghana 60th on the index that monitors 180 countries.

However in 2018, Ghana ranked first in Africa, a slot which is now being occupied by Seychelles.

The report also said “government has shown itself intolerant of criticism. In addition, one-third of media outlets are owned by politicians or by people tied to the top political parties. The content they produce is largely partisan”.

As part of the reasons for Ghana’s dip in the performance, the Reporters Without Borders, explained that based on its findings, journalists in Ghana do not earn decent incomes to sustain their livelihoods. The group therefore scored Ghana 47.22, in terms of the economic context of journalists.

Other indicators which were also used in the computation of Ghana’s current rating included the country’s political, social, legislative and security contexts, amongst others.

Commenting on the report, Francis Abban further stated that the report speaks to the practice of journalism in the country. In his view, looking at past events, such as the murder of investigative journalist, Ahmed Suale, the report can be said to be a reflection of the state of the press in Ghana.

“On the matter on safety, it’s not lost on all of us, the issues to do with journalists who have been arrested in the last one year. And also, even as far back as one of our own who was murdered in cold blood, just in front of his house, Ahmed Hussein Suale.

I had cause to write yesterday on Facebook, very very simply that, the state of justice for Ahmed Hussein Suale, reflects press freedom in Ghana”, he stressed.

He further intimated that, “If you look also to the matter of journalistic practice and the speed with which journalists are picked up or arrested, as against equally reckless statements or comments made within the media space, not by media practitioners, but by say, politicians or persons with high political exposure, we do not see that same rapidity of arrest or detention for a certain number of weeks.

I’m not by this justifying things that happened that are irresponsible and ought to be checked. But we must equally look at the signal it sends to the international community about people who’re working in the media fraternity in Ghana, and what that portends for the health and strength of our democracy”.

Meanwhile, the Ghana Journalists Association (GJA) has described as depressing, the country’s 60th position on the World Press Freedom ranking by Reporters Without Borders (RSF).

“Ghana’s latest ranking in the World Press Freedom Index is depressing enough to effect dramatic mood swings from one of celebration to that of lamentation. Indeed, a drop in ranking had been anticipated due to a confluence of anti-media factors but never did we expect the drop to be so precipitous”, he noted.

Roland Affail Monney referenced some instances where journalists were brutalized, as reasons for the stain on the country’s press freedom.

He stressed that the safety of journalists in the country has sharply deteriorated, a situation he said is the outcome of the country’s current press freedom.

“Death threats on investigative journalists also went uninvestigated let alone punished while law enforcement officers who were supposed to protect journalists rather brutalize them”, he said.

However, Affail Monney contended that the results, although depressing, do not spell doom for Ghana.

He explained that the current situation does not put the country in a manner not to be able to regain its press freedom, but rather “still recognizes Ghana as a regional pillar for democratic stability”.