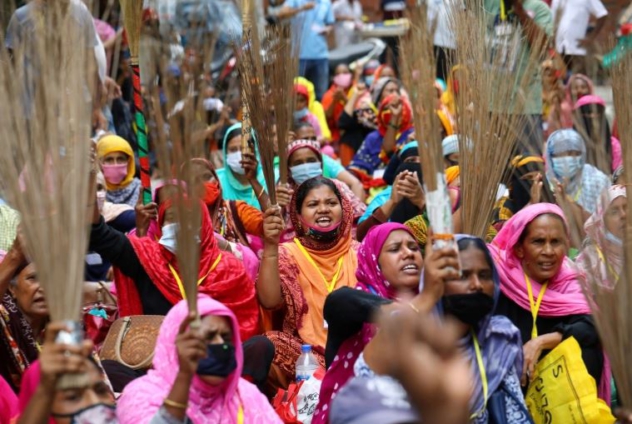 Thousands of Bangladeshi garment workers who lost their jobs due to the coronavirus pandemic are struggling to find work and are at risk of destitution without urgent support, activists and experts said.

At least 70,000 people are estimated to have been laid off after $3.5bn-worth of clothing orders were cancelled or suspended and exports plummeted by 84 percent in April, the Bangladesh Garment Manufacturers and Exporters Association (BGMEA) said.

Most of the country’s 4,000 clothing factories, which employ about four million people – mostly women, reopened in April after a month-long break to stem the spread of covid-19. Bangladesh has seen at least 364,900 confirmed cases and 5,250 deaths to-date.

While factory bosses say the sector has seen a recent uptick – with 90 percent of cancelled orders reinstated – and is hiring again, activists said demand for jobs outstripped supply and pointed to a lack of alternatives and assistance for fired garment workers.

“For every 10 workers who lost their jobs, only one is being hired,” Kalpona Akter, founder of the Bangladesh Centre for Worker Solidarity, told the Thomson Reuters Foundation by phone.

“This is putting the lives of thousands of workers and their families at risk because they haven’t earned for the last three to four months,” Akter said.

With no social security to tide them over, many of the workers have had to leave Dhaka to return to their villages and are now relying on food handouts from local charities, she said.

Sajida Foundation, which has partnered with British clothing app Mallzee to raise money by selling off unwanted stock, said it had distributed about $250,000 among 10,500 garment workers.

Advocates welcomed the initiative but say charity alone will not suffice and have urged the government to work with factory owners and brands to introduce welfare benefits for the sector.

A European Union-funded scheme to provide cash to laid-off garment workers is being discussed, according to a labour ministry official who was not authorised to speak to the media.

The Thomson Reuters Foundation spoke to 20 people who lost their garment industry jobs between April and August. Three had been rehired but most were unemployed and struggling to get by.

“I haven’t paid my rent in two months and I am struggling to feed my children,” said 26-year-old Jesmin, a former seamstress who lost her job in April. She requested to remain anonymous.

“I tried standing outside factories at the start of every month because that’s when they are most likely to hire new workers. But it has been difficult as there are so many of us looking for jobs. I hope October is better,” she added.

Although the industry has staged a recovery lately – with exports reaching $2.9bn in August after falling to $520m in April – factory owners said expected orders were down by two-thirds and that brands were demanding 10-15 percent price cuts.

“The turnaround hasn’t been significant,” said Mohammad Hatem, vice-president of the Bangladesh Knitwear Manufacturers and Exporters Association, which represents about 800 factories.

“We thought we would get a good number of orders before Christmas, but that hasn’t happened.”

Nazma Akter, head of the Sommilito Garments Sramik Federation – a union that represents nearly 100,000 garment workers – said she had come across cases where laid-off workers had been rehired by their former factories but on worse terms.

“It’s been difficult for workers because new orders have been hard to come by,” she said. “Even workers who have jobs now are worried of losing them because of the pandemic’s second wave in Europe.”

Koli, a 26-year-old helper or junior worker, lost her job in April and said she now depended on her family for survival.

“I am not a skilled operator, there isn’t much demand for helpers,” said Koli, who asked to remain anonymous. “I have tried hard, but couldn’t find a job. I don’t know what my future holds.”

DISCLAIMER: The Views, Comments, Opinions, Contributions and Statements made by Readers and Contributors on this platform do not necessarily represent the views or policy of Multimedia Group Limited.
Tags:
Bangladeshi
Effects of Covid-19
European Union
Garment workers