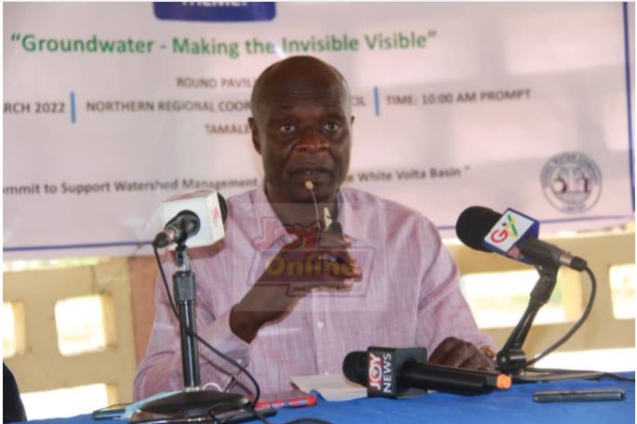 The Production Manager of the Ghana Water Company in the Northern Region, Nicholas Okyere, has said that the threat posed by sand miners to the Nawuni Dam should be treated as a national security concern.

He said not only are sand miners mining in the river, but they are also filling the river with stones to build a road through to the other side of the river for their activities.

Mr. Okyere said this has greatly affected the water level which dropped to 2.3 feet; threatening an eminent closure of the treatment plant in February this year.

Mr Okyere raised these concerns at an event organised by the Catholic Relief Service (CRS) to mark World Water Day on the theme “Ground Water: Making the Invisible Visible”.

He said the area has not got the luxury of taping into ground water therefore the need to protect the Nawuni Dam which is the only source of water in the area.

The issue of sand mining is a huge challenge facing the Ghana Water Company each year.

In 2018. it became a topical issue forcing the Regional Security Committee to order the burning of the tipper trucks which continued the destruction after an ultimatum given to evacuate had expired.

This notwithstanding, sand miners continue to cause havoc on the rivers.

Mr. Okyere said if the sand winners are not evacuated from the area, the treatment plant would soon be shut down.

He said the demand for water in Tamale is about 90,000 m3 and the Dalun Head Works currently has an installed capacity of about 45,000 m3 adding that only 32,000 m3 of Water is produced daily.

She said it was unfortunate that the geological formation of Tamale is not favorable for ground water exploration, therefore, the people largely depend on the White Volta for domestic and industrial use.

Ms Raes raised concerns over increasing human activities such as farming, sand and mineral mining in and around the river basin resulting in serious environmental degradation and siltation.

“Turbidity and mineral level have risen far beyond acceptable levels in the recent years causing rise in production cost and perennial water shortages and rationing. The situation is getting worse year after year due to urbanization, rural urban drift, and population dynamics,” she added.

Ms Raes said considering the importance of the White Volta which serves as the water source for Tamale and its surroundings, there is the urgent need to address the environmental challenges at the dam site.

“Further delays in finding practical and sustainable solutions, the continuous degradation will lead to only one outcome – complete shutdown of Ghana Water Company treatment plant and halt the safe production of water by the utility company,” she said.

The Northern Regional Minister, Alhaji Shani Alhassan Sayibu, said the Region cannot afford to lose the only source of water to destructions by communities along the White Volta.

He said further consultations would be done after today’s engagement to find a sustainable solution to the problem.

“The other thing has to do with the discovery of the ground water and the consequences. Most of us think that if you just sink a borehole and there is water oozing out, you are good to go. Most of us don’t know it also comes with some consequences of metal in the content of the water,” he said.

He reiterated the need for all to join in the fight against activities affecting the Nawuni Dam.

DISCLAIMER: The Views, Comments, Opinions, Contributions and Statements made by Readers and Contributors on this platform do not necessarily represent the views or policy of Multimedia Group Limited.
Tags:
GWCL
National Security
Nawuni Dam
Nicholas Okyere
Sand miners