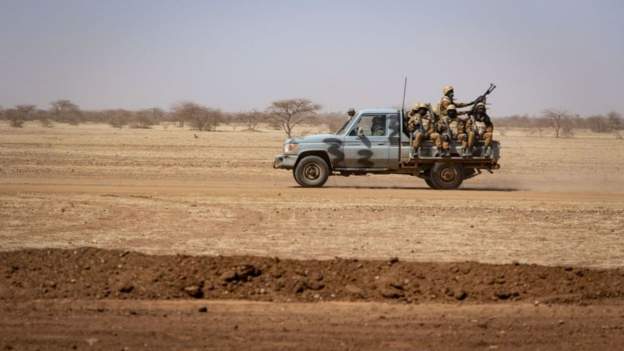 Rebels have in the past used bombs to target patrol vehicles

The attack happened after a patrol vehicle drove over a mine in Gomboro in the Sourou province, according to Le Faso news website.

Two soldiers died on the spot while the third one succumbed to injuries while being treated.

Others who were injured had been evacuated for treatment and the area was being searched, according to AFP news agency.

Improvised explosive devices (IEDs) have been used by rebels in the region, and since 2018 they have killed 150 people, according to an AFP tally.

In late February, four people were killed in an ambush on a police patrol north-east of the country.

Burkina Faso borders Mali in the north-west and Niger in the north-east, and all three countries have had insurgencies that left nearly 4,000 people dead last year.