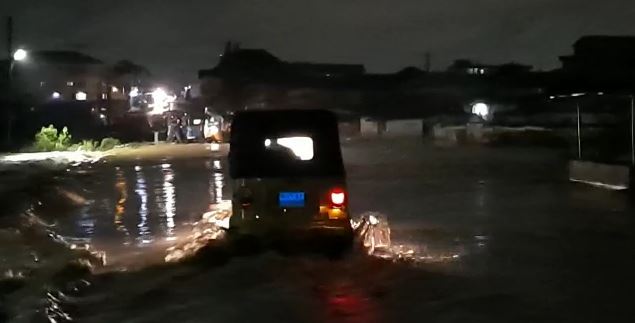 A toddler is feared to have drowned at Sawaba near Affordable Housing Estate in Kumasi after a downpour, Tuesday evening.

The child was travelling with the mother on a tricycle, popularly known as ‘pragyia’, when they got stuck in floodwaters.

In an attempt to continue the journey on foot, the child was swept away by the floods.

The rider, Ahmed Mohammed, says his tricycle got stuck in the flood with the five people onboard, including the child.

The passengers attempted making the journey on foot despite the heavy current of the flood waters.

“I pulled the hand brake to stop the tricycle from moving. The passengers kept shouting in fear. They all got down immediately the tricycle stopped. That was when I saw them fall into the floodwater. It took some men to help them out but we didn’t get the child,” he said.

Despite the incident, many either by foot or vehicles made efforts to cross the water. The bridge over River Wewe linking Sewaba is partly caved in resulting in perennial floods.

Residents say the bridge has become a death trap, especially in the rainy season.

Many parts of Kumasi were flooded after the heavy downpour which continued for over four hours.

DISCLAIMER: The Views, Comments, Opinions, Contributions and Statements made by Readers and Contributors on this platform do not necessarily represent the views or policy of Multimedia Group Limited.
Tags:
drown
Flood
Kumasi
Toddler