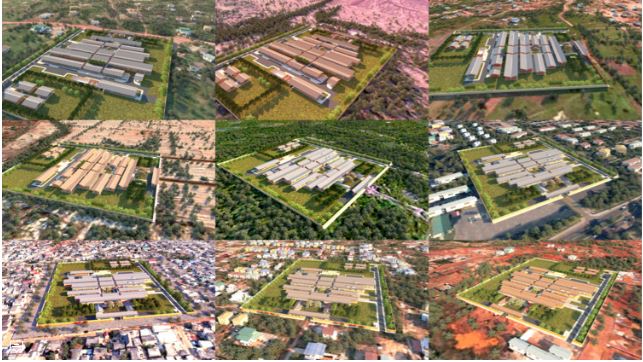 Rise up fallen fighters
Rise and take your stance again
‘Tis he who fight and run away
Live to fight another day – Bob Marley, September 1975

Bob Marley’s “Heathen” was playing as I wrote this. Coincidence and appropriate!!

We fought this whole “architecture fight” and temporarily lost, but we are not losing this second fight. On Tuesday, August 17, 2021, I received a lot of messages with links connected to the 111 District Hospitals to be built all over the country. It was welcoming to those of us who often ply our architecture sometimes in rural areas and seeing that a government was taking bold steps to provide health infrastructure to the citizenry wherever they may be. I was wondering why the messages kept coming.

As the day grew into the morning, I got more than a few calls from Architects; very senior, my contemporaries, much younger architects and even some from the Public Sector. More shocking was the similarities in their questions….” so now Local Ghanaians cannot even design District Hospitals and that has to be given to Adjaye and Associates?” I retorted that of course, he is Ghanaian. “But it was handed over to him on a silver platter?” was a response. “In addition to all other large projects; the Cathedral, and a long list of projects”.

These are serious questions that need to be responded to. I join my colleague architects to say we are seriously concerned with the consistent abuse of Section 40 Procurement Act, without conscience and no attempt to equitably and legally go through the process for local architects who also make a living. There are about 1,200 architects in Ghana and we are not incompetent.

Government projects must be procured in accordance with Procurement Rules

The initial reason for David Adjaye’s grand entry to Ghana was the design and construction of the National Cathedral. It was welcoming to have an architect of repute on our shores. The Cathedral in all intents and purposes was to stop the undignified National Thanksgiving Services at the Independence square and State Funerals at the forecourt of the State House. However, the Ghana Institute of Architects has complained to our political leadership that the procurement of the National Cathedral was not consistent with our laws.

In Ghana, the owner of the land on which there is any development determines the ownership. That is fact and law in Ghana. Regularly, the Planning and Building Permit Application is made in the name of the owner of the land. Therefore, though the President of the Republic mooted the idea of the National Cathedral on state lands, the ownership status changed from a personal vision to a state project regardless of who is funding the project. The procurement therefore should be consistent with our laws and the post-construction operations would have to be assumed by organs of state. It stands to reason that for the construction of the 111 District Hospitals, the same laws will be applicable. There is hardly any further debates about this.

The question, therefore, remains, why does government decide to single-source these projects without recourse to the Section 40 of the Procurement Law? The law states as follows:

Public Procurement Act 663 – Section – 40 – Single-Source Procurement.
(1) A procurement entity may engage in single-source procurement under section 41 with the approval of the Board,

b. where there is an urgent need for the goods, works or services and engaging in tender proceedings or any other method of procurement is impractical due to unforeseeable circumstances giving rise to the urgency which is not the result of dilatory conduct on the part of the procurement entity;

c. where owing to a catastrophic event, there is an urgent need for the goods, works or technical services, making it impractical to use other methods of procurement because of the time involved in using those methods;

Public Statements against Single-Sourcing of Projects

As a man sow, shall he reap
And I know talk is cheap.
But the hotter the battle
A the sweeter Jah victory – Bob Marley, September 1975

What is the internal culture and ethics of Adjaye Associates?

Great firms thrive on great internal ethics and culture. Many corporate gurus believe that internal culture drive the ethics of many conglomerates. It basically sums up ideas, beliefs and values for staff, working environments and how business is procured. So, it is expected that even if the political leadership missed the opportunity to respond positively to our procurement processes and laws, for such an architect of such repute, he should have the structures to pull the plug. Did his legal aides investigate to find out if the project had gone through the legal procurement process? Or did he just welcome a project handed to him because after all, it was an opportunity for more accolades and money?

What is the internal culture and ethics of local consultants on the project?

The project information published lists, local consultants. Many, whom I know personally, are leaders in the industry. Leadership should eschew the spirit of morality at both the individual or community level. Some of these Architects and Engineers complained in the era when the Jubilee House was built. They complained when the National Cathedral was designed. They complained when the Marine Drive was awarded to David Adjaye and Associates. What has changed? These leaders are those who should be at the helm of insisting on compliance with the law and making sure that projects are distributed fairly. For very simple reasons; projects such as these can be used to even build the capacity of younger architects and engineers.

As mentioned earlier, the Estate Department of Ghana Health Service has in their custody designs models of District Hospitals and some have been built. The form is quite simple; a spine for circulation and appendages that spring out of the spine into functional various areas; wards, surgical theatres etc. Indeed, there are aerial photographs of hospitals built in various places in Ghana. He has stated in his write-up to this design that the philosophy behind the concept is a crocodile in form. Many of us doubt this. We expect more from a strong man. We expect this to be interrogated dispassionately. Of course, this design could have been reviewed, specifications upgraded and cost for implementation. If we had this already in our kitty the next question would be whether there was a need to redesign this for the huge sums of money to be paid when Ghana is in dire straits?

This is a typical layout of the Ghana Health Service Model District Hospital.

Where was David Adjaye when the National Infectious Center was executed for free?

In the heat of the covid infections, hospitals were getting filled up, help was needed and Ghanaian Architects, Engineers and Quantity Surveyors stood up and were counted. The Built Environment Professionals led the way to design and build the National Infectious Disease Center. The private sector showed up and financed it to completion in record time. The project was hailed and rivalled. Soon after this, the Indian Institute of Architects had reason to speak to the architects of the project.

One value Ghanaians cherish is benevolence and the Built Environment Professional lived up to this. We would have been elated to have Adjaye join the team, shed a few of his “Big Fish” high valued services to serve the Ghanaian Tax Payer. In the true Ghanaian spirit, we opened our palms and gave to mother Ghana. Yes, we did…for free.

In conclusion, we want a bold statement from the Ghana Institute of Architects and Ghana Institution of Engineering who are at the forefront of this. We also want a statement from our Political Leadership to identify if they stand with us in the obedience of the law or would be “heathen”. We believe in Ghana and nobody can build this country for us. Growth is intentional not just through competition. Sometimes one needs to do conscious hand-holding.

DISCLAIMER: The Views, Comments, Opinions, Contributions and Statements made by Readers and Contributors on this platform do not necessarily represent the views or policy of Multimedia Group Limited.
Tags:
Adjaye Associates
Agenda 111
National Cathedral of Ghana