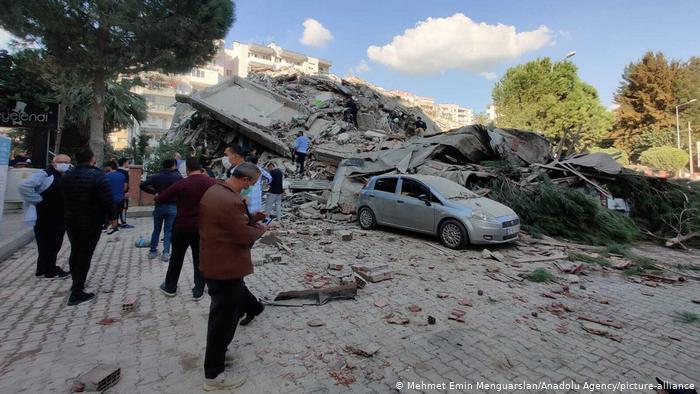 A strong earthquake in the Aegean Sea has rattled Greece and areas of Western Turkey. The magnitude 7.0 quake reportedly caused buildings to collapse in Turkey’s Izmir.

Parts of Turkey and Greece were shaken by a strong earthquake on Friday.

The earthquake struck in the Aegean Sea, rattling areas of Western Turkey and several Eastern Greek islands, as well as the capital Athens. Tremors were also felt in Bulgaria.

Turkey’s Disaster and Emergency Management Presidency said the earthquake’s magnitude was 6.6, while the US Geological Survey placed its magnitude higher at 7.0.

Shortly after the earthquake hit, reports rolled in of collapsed buildings and substantial damage in the western Turkish city of Izmir.

Turkey’s Interior Ministry reported that six buildings were destroyed, while the city’s major reported at least 20 buildings had collapsed.

Local Turkish media showed the wreckage of a multiple story building, with people climbing on top of the rubble.

In Greece, a tsunami warning was issued for the residents of the island of Samos, with people advised to stay away from the coastline.

“A tsunami cannot be ruled out,” Greek seismologist Efthymis Lekkas told Greek state broadcaster ERT. “It is an event that is evolving.”

Water rose above the dock in the main harbor of the island, flooding the streets of Samos.

There were no immediate reports of victims, although the walls of several homes collapsed and other buildings were reported damaged.

DISCLAIMER: The Views, Comments, Opinions, Contributions and Statements made by Readers and Contributors on this platform do not necessarily represent the views or policy of Multimedia Group Limited.
Tags:
Greece
Natural Disaster
Turkey