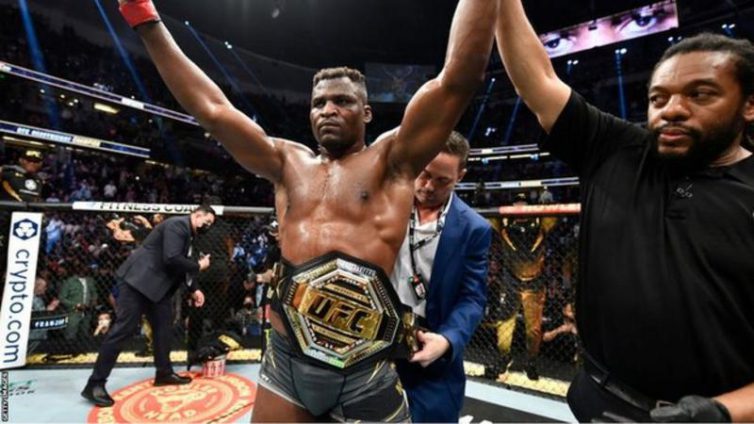 Francis Ngannou produced a stunning comeback to earn a unanimous decision victory over Ciryl Gane and retain his heavyweight title at UFC 270 in Anaheim, California.

Seemingly down two rounds going into the third, Ngannou, 35, utilised his wrestling skills to land a series of takedowns and edge French interim champion Gane on points to unify the heavyweight division.

It was an uncharacteristic move for Cameroon’s Ngannou, whose punching power has earned him the reputation as one of the most fearsome knockout artists in UFC history.

Ngannou admitted his preparations had been hampered by a knee injury in training, but refused to pull out.

He explained: “Three weeks ago, I hurt my knee. But this was a moment for me to make statement and remind people I’m the champ. Some people sleep on me and forget about me.”

After a win apiece and a draw in their three meetings so far, Figueiredo called for an unprecedented fourth title fight with Moreno in Mexico.

Ngannou shows he is more than a knockout artist

The main event was one of the most anticipated UFC heavyweight title fights in recent memory, with the destructive hitting of Ngannou pitted against Gane’s more technical style.

The pair used to be sparring partners with Gane’s head coach Fernand Lopez being Ngannou’s former mentor during a spell in France.

Gane, undefeated in 10 professional fights, appeared relaxed on his walk to the octagon, while Ngannou displayed less emotion, looking stern and intent for his first UFC title defence.

In the early stages, Ngannou patiently waited for his chance to strike, while Gane used his footwork and movement to maintain his distance and avoid damage.

The fight was largely going how experts had predicted, with Gane outpointing the champion with a series of kicks to the legs and body.

Sections of the Honda Centre crowd started to boo in frustration, while something had to change for Ngannou going into round three – and it did.

Realising his tactic of waiting to catch Gane with a big knockout blow was not working, Ngannou caught a high kick from his opponent and slammed him to the ground in powerful fashion.

Ngannou took Gane down again at the end of the round and it was the same story in the fourth as the champion controlled the fight, spending over two minutes on top.

“Whoever wins this round, wins this fight,” said Ngannou’s coaching team as he took deep breaths on his stool before the final round.

Ngannou defended a leglock from Gane and gained top position for a final time, controlling his opponent until the end, before raising both arms in triumph when the buzzer sounded, confident he had done enough to retain his title.

In contrast, Gane went back to his corner with a look of dejection on his face, knowing his undefeated streak and chance at becoming world champion had likely been snuffed out.

‘The evolution of Ngannou’s game’

Despite his knee injury, the champion’s improvements in wrestling and jiu jitsu, showcased with the work he did in taking down his opponent and controlling the fight on the ground, revealed a new side to his game.

UFC welterweight champion and team-mate Kamaru Usman told Ngannou “this is the evolution of your game”, while Ngannou said he always believed in his all-round abilities.

“I knew he would be a tough opponent. I stayed composed, calmed down and trusted myself,” he said.

The bout represented the final fight on Ngannou’s UFC contract, although a champion’s clause ties him into one more.

His future dominated the build-up, with Ngannou making it clear he does not believe he is being paid enough by the UFC and hinting his future may lie in boxing, potentially meeting world heavyweight champion Tyson Fury.

“Boxing is always in my back pocket and something I must do before the end of my career,” added Ngannou.

“It’s not like I have a lifetime here so I will think about it.”

Gane acknowledged his disappointment, but maintained he will be back.

He said: “I’m so sorry for today, congrats to Francis he did very well. It was a good experience and I have my whole career in front of me.”

In the co-main event, Figueiredo, 34, atoned for his defeat by Moreno, 28, in June as he earned a unanimous decision victory to become a two-time UFC world flyweight champion.

The Brazilian edged a close contest, flooring the Mexican multiple times and landing a number of damaging leg kicks.

“Today it’s my day in there, thank you Brandon for this moment and for giving me the fight of the night,” said Figueiredo. “I’m ready for a fourth fight against you in Mexico.”

DISCLAIMER: The Views, Comments, Opinions, Contributions and Statements made by Readers and Contributors on this platform do not necessarily represent the views or policy of Multimedia Group Limited.
Tags:
Ciryl Gane
Francis Ngannou
UFC Heavyweight title