Ugandan singer sweeps street as apology for showing up late to a performance - MyJoyOnline.com 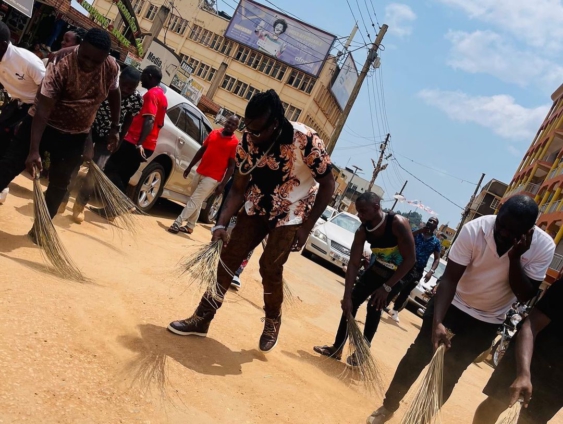 A Ugandan musician took to the streets of his community, Masaka City, to sweep as part of his efforts to apologise for being late to an event slated for Monday, Valentine’s Day.

Taking to Instagram to render an apology, the singer Pallaso said he was remorseful and takes full responsibility for showing up late.

“It was my fault and I am truly sorry. I have swept a few streets with my friends downtown Masaka today to remind you that I am your son and you mean the world to me,” he wrote in the post.

Pallaso also shared photos of himself and his friends cleaning the streets. He noted that without the people and their support he would not have chalked the success he has.

This comes after it was reported that some fans of Pallaso got into a fight after waiting hours for the musician to show up to perform.

Although he later showed up to perform, fans were reportedly still angry at his actions.

Meanwhile, Pallaso in his post noted that he understood the patron’s frustrations and apologise after his lateness fueled the fight.

A post shared by King Of The East (@pallasomusic)

“To all my fans in Masaka, I sincerely apologize for making it late for the show last night. I understand why you ran out of patience and the situation went out of hand. It was my fault,” he added.