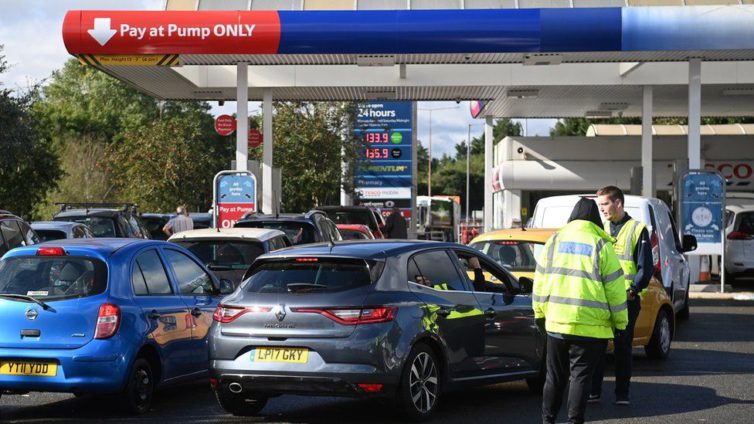 There were queues at many petrol stations on Monday, including in Friern Barnet, north London

The Army is ready to help ease fuel supply problems after the fourth day of long queues and pump closures.

Up to 150 military tanker drivers will prepare to deliver to forecourts that have run dry because of panic buying.

The surge in demand came amid fears a driver shortage would hit fuel supply – which is plentiful at refineries.

The UK is estimated to be short of more than 100,000 lorry drivers – causing problems for a range of industries, including food suppliers and supermarkets, in recent months.

The government has blamed people needlessly buying fuel for causing queues at many petrol stations – and fuel to run out in some places.

Motoring group the RAC said the price of a litre of unleaded petrol has risen by a penny since Friday to an eight-year high. It added it was aware a small number of retailers were hiking prices amid the soaring demand.

Meanwhile, there are mounting calls for key workers, like health and social care staff, to receive priority access to fuel where it is available.

Business Secretary Kwasi Kwarteng said the move to place the Army on standby – meaning it is ready to respond to any request for support – was a “sensible, precautionary step”.

“If required, the deployment of military personnel will provide the supply chain with additional capacity as a temporary measure to help ease pressures caused by spikes in localised demand for fuel,” he added.

The BBC’s deputy political editor Vicki Young said she has been told an initial 75 military drivers would be on standby, with up to 150, and the same number of support staff, available if needed.

They require specialised training which takes up to five days, she said.

The government has also authorised an extension to special driver licences that allow drivers to transport goods such as fuel.

ADR licences due to expire between 27 September and 31 December will have their validity extended until 31 January 2022, without refresher training or exams.

Labour said the latest response to the fuel crisis was “an admission of failure” and that asking the Army to step up was “a sticking plaster”.

Leading fuel suppliers, including BP and Shell, have sought to reassure the public that supplies remain unaffected at source – with pressures expected to ease shortly.

“As many cars are now holding more fuel than usual, we expect that demand will return to its normal levels in the coming days, easing pressures on fuel station forecourts,” they said in a joint statement.

Doctors, nurses, prison staff unions and care staff have called for essential workers to be given priority for fuel.

The UK Homecare Association said people had been left waiting for carers at home because staff had been caught in queues for petrol.

Unison called on ministers to use emergency powers to “designate fuel stations for the sole use of key workers”.

Some ambulance trusts have their own fuel pumps in their depots and their supplies are expected to be prioritised – but essential workers can still be caught out.

One ambulance driver in north London told the BBC he had visited several filling stations in his search for fuel.

“I had zero tank, I was on my reserve, the light was on, it was getting chaotic, my heart rate was going through the sky,” he said, after finally buying fuel in Brent Cross.

Carol Curry, who needed fuel to drive her husband to a hospital appointment, said she blamed the media for frenzied scenes at the pumps.

“If nobody had said about this, the lorry drivers and everything, then this panic wouldn’t have started,” she said.

The government has temporarily exempted fuel companies from competition law, allowing them to work together to target supplies at areas most in need.

But Richard Walker, the managing director of supermarket Iceland, told BBC Two’s Newsnight the visas would not begin until mid-October, adding: “I don’t know who would give up a full-time job in Europe for a matter of weeks.”

Nearly one million drivers qualified to drive heavy goods vehicles are being encouraged to rejoin the sector, and some 3,000 new recruits are expected to undertake short, intensive driving courses.

Factors including Brexit, the pandemic, pay levels and an aging workforce have all contributed to a shortage of lorry drivers.

After the UK left the European Union, many European drivers went back to their home countries, or decided to work elsewhere because of the additional border bureaucracy and the impact it had on their income.

The pandemic also prompted many foreign drivers to return home and led to a huge backlog in HGV driver exams. Driver shortages have also been seen in EU countries, including Germany and Poland.