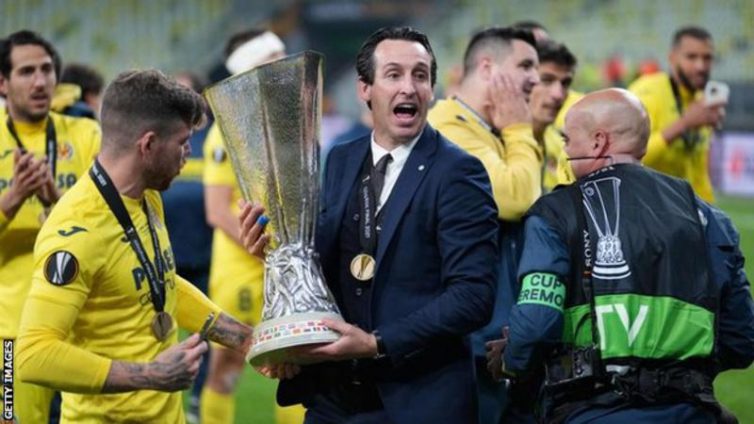 Unai Emery will turn down the chance to become manager of Newcastle United and will instead stay with Villarreal, reports Guillem Balague.

The former Arsenal boss confirmed on Tuesday he had been approached by the Premier League club, who made him their first choice to replace Steve Bruce.

Newcastle had hoped to have the Spaniard in place by the weekend.

But their manager search looks set to continue, with Eddie Howe and Paulo Fonseca possible alternatives.

Spanish football expert Balague says those advising Emery were left feeling uncertain about the club’s strategy, with stories in England emerging that the shortlist was down to him and ex-Bournemouth manager Howe – two men with contrasting approaches and vastly different levels of experience within European football.

“Emery felt a huge pressure on the day of their match [a 2-0 win over Young Boys in the Champions League on Tuesday],” said Balague.

“And then there was the lack of a clear vision from the club. If you want him, do you approach him in such a rushed way, without an official offer and with it coming out from the English side that it is all practically done?

“Also, the different number and style of the candidates being considered appears to be a sign of a confused vision. That was a concern to some of those involved in conversations with the club hierarchy.

“I don’t see this move happening now this season. Maybe next year when the club’s structure is clearer and the vision more defined.”

Emery, 50, was interested in taking charge of Newcastle following the Saudi Arabia-backed £305m takeover which has made them one of the richest clubs in world football. and is believed to have been flattered by their interest in him.

But when he met with Villarreal’s owners, the Roig family, they attempted to convince him to stay. The club’s players did likewise and his family also told him it was not the right time to move to St James’ Park.

As well as Howe and former Roma boss Fonseca, Balague reports the Magpies have previously made approaches for new Tottenham manager Antonio Conte, Barcelona legend Xavi and ex-Germany manager Joachim Low but all have turned the opportunity down.

In a news conference on Tuesday, Villarreal president Fernando Roig said he was not worried about the interest in Emery and was “sure that his mind is not drifting elsewhere”.

“Unai has a contract with us and contracts are there to be fulfilled,” Roig said. “We hope that we will be able to see that contract through until the end. I have no doubts about his professionalism in that respect.”

Emery led Villarreal to the Europa League title last season, beating Manchester United on penalties in the final in May.

Before his appointment at the Spanish club, he had an 18-month spell in charge of Arsenal before being sacked in November 2019.

In three years at Sevilla from 2013-16 he claimed three successive Europa League titles and then took over at Paris St-Germain, where he won Ligue 1 and two French Cups.

Two wins from their opening 11 games means Villarreal are 13th in La Liga but Tuesday’s victory over Young Boys moved them level on points with Manchester United at the top of Champions League Group F and in a strong position to reach the last 16.