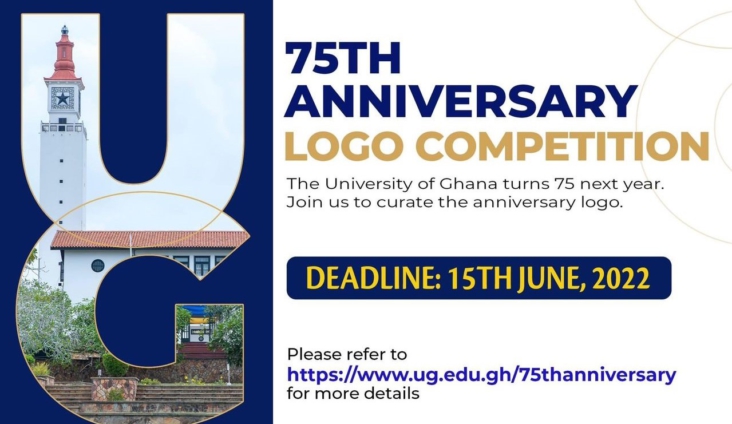 The winning design will attract a prize of ¢5,000, a certificate of honour and recognition at the official launch of the anniversary celebration.

The University of Ghana (UG) has launched a competition in search of a commemorative logo for its 75th anniversary celebrations in 2023.

Established in 1948, the University has risen to a position of dominance in higher education excellence in the country and the sub-region.

It was ranked the top university in Ghana by the Webometrics January 2022 Rankings and the World Scientific Index for 2022.

In recognition of its sterling success story, and to celebrate the milestone, the University has lined up a series of anniversary activities to be held under the theme, ‘Nurturing Resilience: Adopting Technology, Embracing Humanism.’

The celebration will aim to catalogue UG’s successes and challenges, while proposing ideas for enhancing and enriching its future.

As the main commemorative symbol, the anniversary logo will serve as a rallying point of identification during the celebrations.

To make the logo relevant and owned by the diverse UG alumni, students, staff and other stakeholders, the University has launched a logo competition which will enable the University to tap into its rich and creative human resource base across the world.

Participants in the competition are required to submit a logo design in JPG format with a minimum resolution of 1280×960 and size A4 (21cm x 29.7cm) to this email.

The winning design will attract a prize of ¢5,000, a certificate of honour and recognition at the official launch of the anniversary celebration.