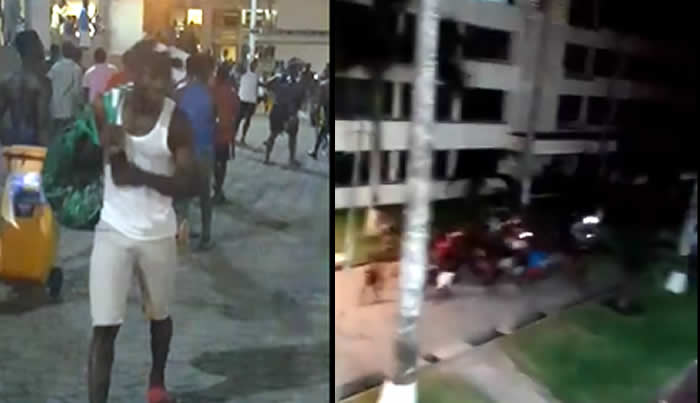 Some university students on Sunday run amok with jubilation after latest directives to deal with the coronavirus scare shut down schools indefinitely.

President Nana Akufo-Addo’s televised address to update the country on steps being taken to prevent the spread of the deadly pandemic, among other things, ordered the indefinite closure of all educational institutions from Monday, March 16, 2020.

“All universities, Senior High Schools and Basic Schools, i.e. public and private, will be closed from Monday, March 16 until further notice,” the President said.

He also ordered the suspension of all public gatherings for the next four weeks.

Shortly after the latest round of updates, a video emerged of the Cape Coast University students celebrating wildly, some carrying big bags to signify they were leaving campus.

A student can be heard singing a song a public address system that translates as ‘I won’t go to school anymore.’

Shortly after that, another video emerged of students at the University of Education, Winneba also celebrating the indefinite closure of schools.

Ghana on corona virus..😂😂best place to be n the world.. #coronavirusghana
UEW students when Nana Addo closed down all schools in Ghana pic.twitter.com/jl0ttHDIeZ

Sunday’s sweeping directives by the President ban all public gatherings including conferences, workshops, funerals, festivals, political rallies, sporting events and religious events such as services in churches and mosques.

The President said, however, that private funerals will be permitted if there are no more than 25 people in attendance.

Earlier on Sunday afternoon, health authorities announced that the country has recorded four new cases of the disease, bringing the total number of confirmed cases to six.

DISCLAIMER: The Views, Comments, Opinions, Contributions and Statements made by Readers and Contributors on this platform do not necessarily represent the views or policy of Multimedia Group Limited.
Tags:
Coronavirus
University of Cape Coast
University of Education Winneba