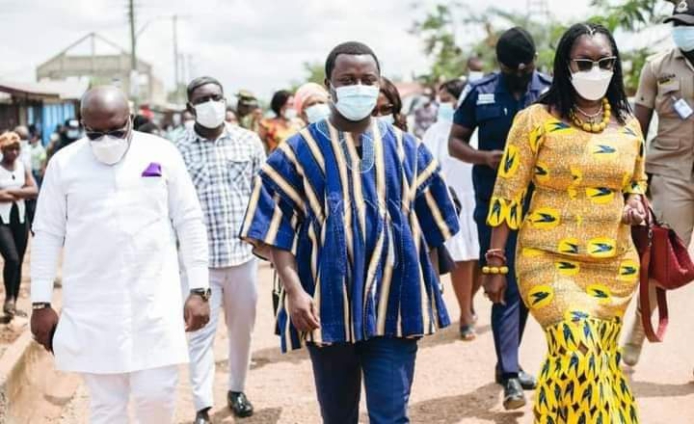 The Minister of Communications and Digitalisation, Ursula Owusu-Ekuful has commissioned an Information and Communication Technology (ICT) centre for the people of Akyem-Bieni in the Eastern region.

The centre which has a library compartment forms part of the broader vision to intensify ICT education in the country and also encourage the youth to participate in the technology world.

The facility built by the head of the National Cybersecurity Centre, Dr. Albert Antwi Bosiako will train and make ICT skills and techniques common to the residents of the area.

Through the Education for Development (E4D) Foundation, a non-profit and non-governmental organisation, Dr. Antwi Bosiako’s vision to support the community he hails from has been actualised.

He named the centre after his mother, Janet Brako whom he extolled for ensuring that he had the best of education.

The Janet Brako Library and ICT centre has both physical and electronic books & resources to support reading, learning and research; to support pupils at the elementary level of education (Pre-SHS) where critical intervention is needed to allow them to pass their basic education to be able to access the government’s free SHS education.

According to Dr. Albert Antwi Bosiako, the facility will give children the opportunity to learn how to use technology and information in ways appropriate to their needs and aspirations.

“Beneficiary residents will gain core ICT skills that will assist them to pursue further education or enable them to learn any income-generating trade for development”.

Addressing a gathering of Chiefs and the residents to inaugurate the facility, MP for Ningo Prampram, Samuel George Nartey encouraged parents to invest in their wards’ education for a better future.

He said if it was not for the sacrifices made by Janet Brako, Dr. Antwi Bosiako may not have succeeded in life.

The Communications Minister, Ursula Owusu-Ekuful observed the need for Africa to take advantage of its youthful population and give the right digital skills.

“I am absolutely convinced that because of our demographic dividends Africa has the youngest population on earth. We have more young people than any other continent on earth. Europe and Asia have an ageing population, we have a very youthful population.

“If we give our young people the right digital skills today, they will provide the manpower to man all the infrastructure in the world tomorrow. And it is digital skills and technology which will make the key to leapfrog development and that’s why we think this facility is so useful and so important for all the young people of our country,” she explained.

The Minister stated that her outfit will continue to partner with individuals who want to put up such facilities.

“My pledge is that once the structure is put up, Gifec will provide the tools, and equipment needed. The computers and all of that to equip any such facility so that if we engage in such partnership we will broaden the scope of these ICT centres across the country,” she stated.

The Minister used the occasion to inaugurate a committee to spearhead the implementation of the foundation’s activities.

Others are Educational Infrastructure Support and Educational Networking for Community-Based Development.

The community has an estimated population of about 1,000 residents.

Akim-Bieni is a typical farming community with most of its residents being farmers and petty traders. It has one kindergarten, 1 primary school and 1 junior high school.