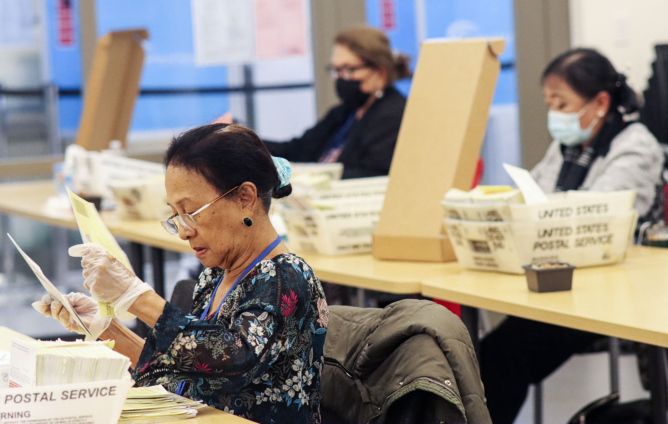 Americans head to the polls today for an election that has state and local officials across the country on edge as they brace for potential problems at the polls, contentious legal fights over ballots and fighting disinformation about the vote itself.

The hyper-polarized political climate has seen the vote itself come under a sustained barrage of attacks and disinformation for the better part of two years amid repeated false claims from former President Donald Trump that the 2020 election was stolen.

Early voting has provided a preview of the potential issues both big and small that could arise on Election Day, from armed ballot box watchers in Arizona accused of conspiring to intimidate voters to a legal fight over technical errors invalidating mail-in ballots in Pennsylvania.

Legal fights: In all, there have been about 120 legal cases surrounding voting filed as of November 3, compared to 68 before election day in 2020. More than half of the cases have sought to restrict access to the ballot, according to the Democracy Docket, a liberal-leaning voting rights and media platform that tracks election litigation.

In Pennsylvania, some counties are urging voters to correct absentee ballots with missing or improper dates that the state Supreme Court ordered to be set aside, while a federal legal challenge over is still looming. In Michigan, meanwhile, a judge rejected a lawsuit Monday from the GOP secretary of state candidate seeking to throw out absentee ballots in Democratic-heavy Detroit.

Georgia’s Cobb County on Monday extended the deadline for roughly 1,000 absentee ballots to be turned in until Nov. 14, after the ballots were not mailed out until just days before Election Day due to procedural errors in the election office.

Possible conflict with election deniers: In Arizona, the secretary of state’s office has sent 18 referrals to law enforcement related to drop-box intimidation, including a threatening message toward a government worker and several voters reporting being filmed at drop box locations in Maricopa County last week. A federal judge earlier this month imposed new restrictions against a right-wing group in the state following complaints about aggressive patrols of ballot boxes in the state, including blocking the members from openly carrying guns or wearing body armor.

DISCLAIMER: The Views, Comments, Opinions, Contributions and Statements made by Readers and Contributors on this platform do not necessarily represent the views or policy of Multimedia Group Limited.
Tags:
2020 Election
Legal fights
US