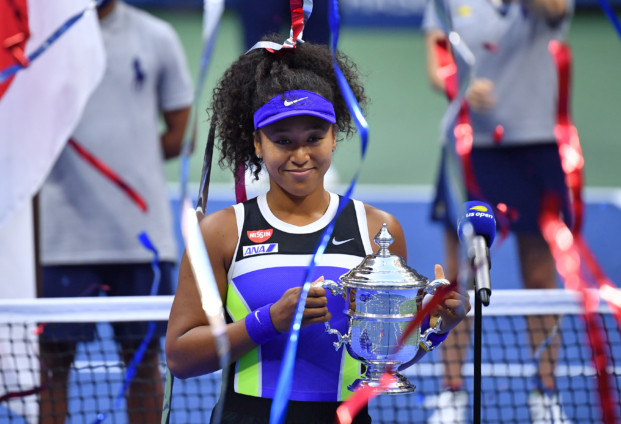 Naomi Osaka demonstrated her growing maturity to fight back against Victoria Azarenka in a compelling US Open final and claim her third Grand Slam title.

Osaka was overwhelmed in the first set and in danger of trailing 3-0 in the second but then won 10 of the next 12 games to seize the momentum.

The Belarusian, 31, in her first major final since 2013, was broken for 5-3 in the decider before Osaka served out.

Osaka shrieked with joy as she took her second match point, then calmly lay on the court and stared at the New York sky as she contemplated her latest achievement.

Osaka’s level raised considerably as Azarenka was unable to maintain the intensity she showed in a one-sided opening set.

The fightback ensured Osaka, who won the 2018 US Open and 2019 Australian Open, maintained her record of winning every Grand Slam final she has played in.

“I don’t want to play you in any more finals, I didn’t really enjoy that, it was a really tough match for me,” Osaka jokingly told Azarenka.

She added: “It was really inspiring for me because I used to watch you play here when I was younger. I learned a lot, so thank you.”

Another US Open title for Osaka – but a contrasting occasion

It left Osaka in tears as she stood on the podium waiting to collect her first Grand Slam trophy.

This second success could not have been more different.

Here she had to fight back from a set down against an inspired Azarenka – and navigate a tricky decider which could have swung either way – on an Arthur Ashe Stadium left virtually empty because of the coronavirus pandemic.

And even in what were still strange circumstances, Osaka could this time enjoy the moment with a beaming smile as she lifted the prize in the company of her team and rapper boyfriend Cordae – even if she had to take the trophy from the table herself rather than be presented with it because of social distancing rules.

Osaka looked a little lost as Azarenka overwhelmed her in a fast start, hitting 13 unforced errors and struggling to cope with the Belarusian’s proactive play and controlled aggression.

Draping a towel over her head at changeovers was a sign of Osaka’s concerns. Her attempts to collect her thoughts and regain her composure did not initially work, however.

Another wayward forehand prompted a frustrated Osaka to throw her racquet to the floor in disgust.

Eventually, though, the mental resilience which she says she has developed over recent months came to the fore.

“I just thought it would be embarrassing to lose this under an hour,” said Osaka, who will rise to third in the world after her win.

That resulted in a major momentum shift in her favour as Azarenka threatened to move 3-0 ahead in the second set.

A rasping forehand by Osaka at 40-30 proved pivotal, not only in the game, but ultimately in the whole match as she seized control to level.

The former world number one maintained that level in the decider to earn a 4-1 lead, but was unable to convert one of four break points to move 5-1 ahead.

That might have proved costly when Azarenka immediately put the set back on serve, only for Osaka to battle back again by winning what proved to be the final two games.

DISCLAIMER: The Views, Comments, Opinions, Contributions and Statements made by Readers and Contributors on this platform do not necessarily represent the views or policy of Multimedia Group Limited.
Tags:
Naomi Osaka
US Open
US Open 2020