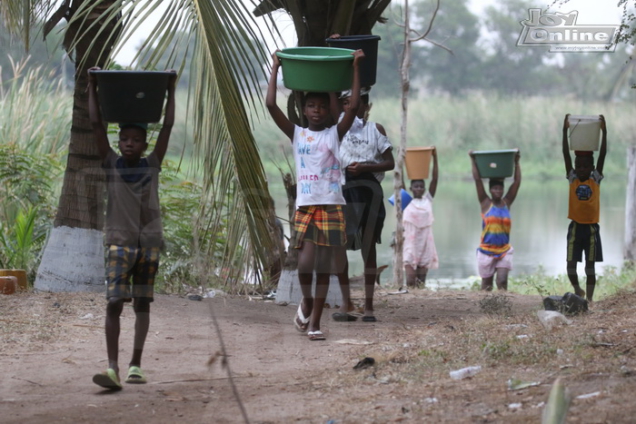 In the past few weeks, residents of Ngleshie Amanfro in the Ga South Municipality of the Greater Accra Region, have been subjected to an acute water shortage which has been described as the worst in ten years.

The situation has compelled residents to use sachet water for their household needs while others who cannot afford sachet water are compelled to fetch water from untreated sources such as the Densu Lake.

The situation, which has affected academic work in schools within the town and its environs, has also placed some financial burden on residents as some of them said they spend GHC20.00 to GHC30.00 a day buying sachet water for domestic use.

Other residents have to wake up at dawn to walk long distances in search of water. Children are not left out as they carry yellow gallons in tow.

A visit to some areas along the banks of the Weija Lake revealed a scene where children had to go deep into the lake hoping to get clean water from the water body that has turned green.

Uncle Ebo, who is the owner of Bakano Bar which is located on the banks of the lake, said he saw some children entering the lake to fetch water. He stopped them but realized that without water the children could not go to school, so he used his water pump to supply water for the community for 3 days.

Mr. Edward Amoah who was seen offloading gallons of water he had bought from a water reservoir outside the community, appealed to Ghana Water Company to quickly do something about it.

In an interview with the Public Relations Manager of the Ghana Water Company, Mr Stanly Martey, he said the situation has been rectified and assured residents of the affected communities that by close of day on Friday, water will flow through their taps.