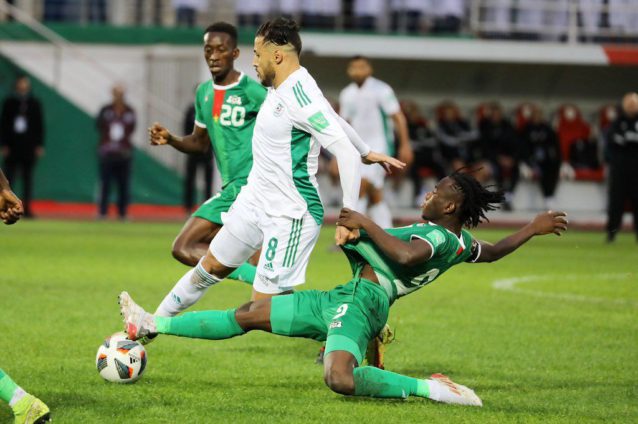 Algeria and Nigeria survived a late scare in their final group games to book a place in the playoff round of Africa’s 2022 FIFA World Cup qualifiers on Tuesday, November 16.

Algeria and Nigeria heading into the last round of fixtures needed a point each from their respective games to qualify as group leaders ahead of their closest rivals.

Playing at home, the North African side were twice pegged back after taking the lead against Burkina Faso.

A 21st minute strike from Riyad Mahrez was cancelled out by Zakaria Sanogo before the half-time whistle, with Issoufou Dayo also levelling things from the spot after Sofiane Feghouli restored Algeria’s lead.

The game ended 2-2 ensuring the Dessert Foxes progress into the next round of qualifiers.

In Lagos, Nigeria also recorded a 1–1 draw against Cape Verde to also book a playoffs spot with Victor Osimhen and Stopira finding themselves on the scoresheet.

Algeria and Nigeria join Democratic Republic of Congo, Egypt, Ghana, Mali, Morocco and Senegal, who have already made it to the next round of qualifiers to determine the five teams to represent Africa at the World Cup next year.

Cameroon and Tunisia also sealed their spots in the playoffs beating Ivory Coast and Zambia respectively.

While the Black Stars have booked their place as things stand, South Africa have lodged a complain to FIFA to investigate their game against Ghana as they suspect unfair treatment from the match officials at the Cape Coast Stadium.

Results from other qualifiers in Africa