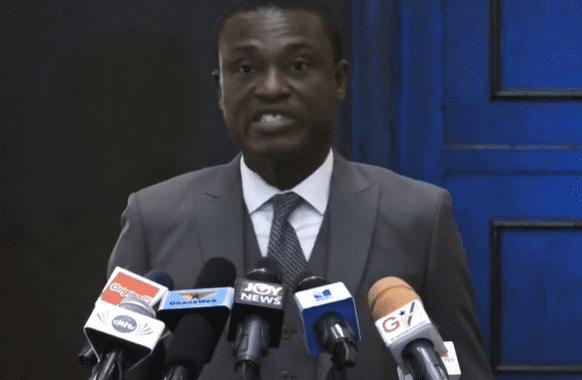 Addressing the press on Thursday to commemorate International Anti-Corruption Day, he disclosed that the Office of the Special Prosecutor (OSP) has completed a review of all the alleged cases of corruption and corruption-related offences before it.

Currently, there is no case by the OSP pending in the courts, he added.

Speaking at Kempinski Gold Coast Hotel in Accra, Mr Agyebeng stated that the Office of the Special Prosecutor had not been operationalised and was without its own staff and necessary resources.

“The fight against corruption had, in effect, been thrown in reverse for three years,” he lamented.

Upon sighting this when he assumed office on August 5, this year, Mr Agyebeng said he triggered the processes to set up and operationalise the Office, staff it with specialised trained personnel, and fit it with the required material resources and equipment.

He emphasised that by so doing, the fight against corruption has been resuscitated.

Therefore, the Special Prosecutor reiterated his commitment to ensure corrupt practices in the country are at a bare minimum.

“We will carry on the renewed fervour during my tenure in office…As the institution specifically tasked with taking steps to prevent corruption, I resolve that in the coming year, the OSP will institute and strengthen measures to prevent, suppress and repress corruption more efficiently and effectively than has ever been done in this Republic.

This should portend hope that Ghana is taking concrete steps to drive down the incidence of corruption,” the Special Prosecutor said.

Meanwhile, as part of its pressure-for-progress drive, the Office of the Special Prosecutor will January next year institute an Annual Ghana Corruption League Table to assess perceived levels of public sector corruption in the estimation of experts and business people.

According to the Special Prosecutor, “public agencies would be ranked against each other on a corruption barometer and the results would be publicised every December 9.”

Again, Mr Kissi Agyebeng used the platform to urge members of the general public to renew their minds and desist from corrupt activities that go a long way to have adverse effects on the economy.

He also encouraged them to provide information on transactions carried out by corrupt individuals.

“We cannot continue on the path of see-no-evil-hear-no-evil. So let us expose the evil of corruption and let us eschew corrupt practices – as we bear in mind that ours should be a life of live-and-let-live in the national interest.

“We must transform our thinking and psyche from a ritualistic gift-giving society marked by undeserved attainment of wealth to secure undue advantage in all spheres of life to one of merit-based rewards.

This is our sure chance to curb corruption and we cannot miss this opportunity.”

“As we mark International Anti-Corruption Day and anti-corruption week, I invite all well-meaning Ghanaians to renew our mindsets and collectively help to turn the negative narrative of corruption to transform this Republic and place it on a solid developmental track,” he concluded.