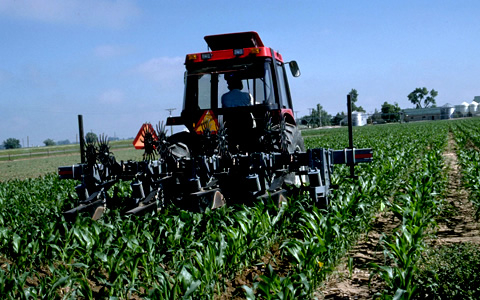 Fascinated by the advanced technology on farms in America, African farmers are demanding increased access to mechanized means of farming as the sure way to ensure food security and help lift the continent out of poverty.

In sub-Saharan Africa, it is estimated that 70 percent of agricultural production is subsistence farming and very little commercialized farming occurs. A lot of farmers in Africa rely on light implements in their farming, use traditional seeds and employ mainly family labour on their farms. The average farm size in the United States of America is 178 hectares but in Africa, it is as low as 2.4 hectares with a majority of the producers relying on hoe and cutlasses to farm at very low productive rates. The continent is heavily dependent on imported food with the annual average food import bill currently standing at about $50 billion.

Through the Global Farmers Network, a number of farmers from Africa and other parts of the world had the opportunity to pay a visit to one of America’s most productive farms in Iowa. With a degree in degree in psychology from the University of Iowa, John Maxwell who runs Cinnamon Ridge Farms started farming in 1988 with a bank loan from the eight bank he had approached after the seven before that turned him down.

Today, John has a 2000 hectares farm on which he grows soy, maize and other crops. He doesn’t rely on the machete and the physical strength of his staff to produce. He has a highly mechanized farm on which he uses machines to clear his fields, sow and harvest, relying on tractors, ploughers and combined harvesters among others. This is aside from the more than 240 cattle he uses in the production of milk and milk products.

The farm is so mechanized that on the 2000 plus hectares of farm fields, there are only 11 workers. He produces 22 tonnes of corn per hectare on his farm fields when in Africa, the average level of productivity on corn farms is 1.5 tonnes per hectare.

Leaders of various African farmer groups who visited the fields were excited about what they saw. Nana Aisha Bashir who is national vice president of All Farmers Association of Nigeria and owns 3.5 hectares of farm fields said she will be glad to see such technology on her farm because it is more efficient. “With this type of technology, a lot of cost is being cut.

A farm of more than 2000 hectares, he has only 11 workers there. And there is precision in everything he is doing. You don’t over fertilise. You don’t over water. Everything is done properly to minimize the cost of production and you end up getting high yield at a lesser cost,” she said.

She encouraged her government to invest more in such technology to help make farming better. “Nigeria has the money to go into it (mechanized farming). If our governments are serious, we can do this. The government needs to subsidise some of these inputs to farmers and provide them with credit facilities at very conducive interest rates…,” Bashir said.

Jurua Jackson McPeace who is Vice President of the Uganda National Farmers Federation is equally convinced a lot of the food insecurity challenges in the country can be fixed with improved technology on farms. “(In my country), farmers are not producing enough. The productivity is so low. They are food insecure. Income levels are so low. And that is not good. Mechanization is the way to go,” he said.

He says his association is already working on helping their members secure such mechanized tools to improve upon productivity. “We cannot depend on the hoe. We as a federation we are talking to tractor companies and finance institutions to see if we can have internal arrangements so we avail these tractors to farmer associations on a contract basis to groups of farmers to be able to rent these tractors to improve upon tillage and improve upon areas they can cultivate,” Jackson said.

“Government should avail subsidies… they are already availing subsidies by providing seeds. But apart from that, it will be good if they subsidise the services of these tractors,” he added.

President of the Ghana National Farmers and Fishermen Award Winners Association Davies Korboe told Alliance for Science he is equally convinced the sure way for Africa to be self-dependent in food security and economically is for improved technology to be introduced on farms.

“Our president is preaching Ghana and Africa beyond aid. The only way to go is to see African farms being well mechanized, using a lot of these innovations, and getting GMOs to penetrate our systems to make our farmers rich and also to alleviate poverty. And above all, to be food secured,” Korboe explained.

“Through that, we can still export to the United States and other countries and make a lot of money and through that, there will be Africa beyond aid,” he added.

In Ghana’s Parliament, the issue of mechanizing agriculture came up for discussion during debate on Agric productivity with legislators calling for a prioritization of mechanization in farming practices in the country.

“Farmers need to move from the regular farming with the cutlass and the hoe and peasant farming, and move into mechanized farming,” Deputy Majority Leader in Ghana’s Parliament Sarah Adwoa Sarfo told the house.

John Maxwell of Cinnamon farms is convinced such technology can be transferred from America to other parts of the world and it will work fine. "There is something that all of we farmers have in common….we want to do better, we want to grow our farm as best as we can… there are things on this farm I learnt from my visit to Chile… Farmers learnthe best practise from all over the world,” he said.