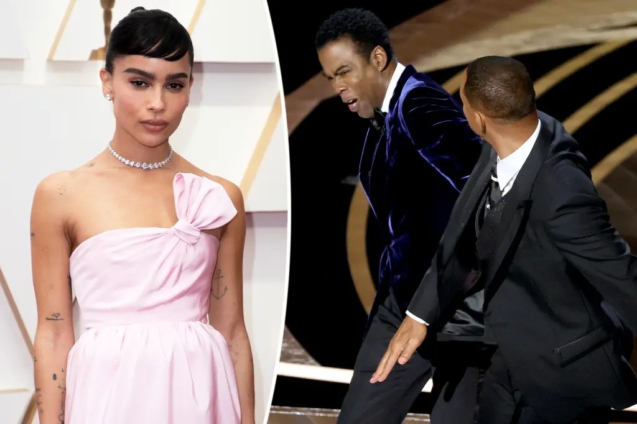 The actress, 33, took to Instagram on Tuesday to share a photo of herself posing on the red carpet with the caption: “Here’s a picture of my dress at the show where we are apparently assaulting people on stage now.”

Kravitz was in the audience at Hollywood’s Dolby Theatre when Smith, 53, smacked Rock, 57, across the face for poking fun at his wife.

The “Red Table Talk” host, 50, who suffers from alopecia and shaved her head last summer, was the butt of Rock’s joke as he compared her to Demi Moore’s bald-headed character “G.I. Jane.”

Smith tried to laugh off the remark, but became incensed after he sensed Pinkett Smith’s annoyed reaction. The actor then stormed the stage to accost a confused and stunned Rock.

After returning to his seat, Smith repeatedly shouted at the comedian, “Keep my wife’s name out of your f–king mouth!”

The Academy released a statement on Monday, condemning Smith’s behaviour and revealing that a “formal review” had been launched.

“We have officially started a formal review around the incident and will explore further action and consequences in accordance with our Bylaws, Standards of Conduct and California law,” the statement read in part.

“Violence in all of its forms is poisonous and destructive,” the Best Actor winner wrote. “My behaviour at last night’s Academy Awards was unacceptable and inexcusable. Jokes at my expense are a part of the job, but a joke about my Jada’s medical condition was too much for me to bear and I reacted emotionally.”

He added, “I would like to publicly apologize to you, Chris. I was out of line and I was wrong. I am embarrassed and my actions were not indicative of the man I want to be. There is no place for violence in a world of love and kindness.”

Smith is likely to be disciplined and may even have his Academy membership suspended, according to The Hollywood Reporter. However, his award for Best Actor — his first Oscar won Sunday night for his role in “King Richard” — is less likely to be revoked.

Rock chose not to file police report against Smith for his onstage slap, according to the Los Angeles Police Department.

Meanwhile, Pinkett Smith has advocated for peace in the wake of her husband’s outburst.

“This is a season for healing and I’m here for it,” read a graphic that she posted on Instagram Tuesday.